ANC document allies country with China and Russia, in spite of economic risk 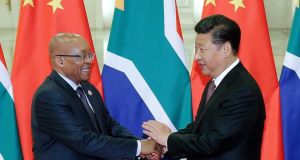 South Africa’s ruling African National Congress party appears intent on adopting a pro-Chinese anti-western approach to its foreign policy in the years ahead, a new document released by the former liberation movement suggests.

The discussion paper that will be presented at the ANC’s national general council next month claims the rise of China’s economy “has heralded a new dawn of hope for further possibilities of a new world order” and that China “is gradually redefining the world towards a multipolar order”.

Under its international relations section the authors, who include several serving and retired cabinet members, openly criticise US foreign policy and defend China and Russia against the “wrath of US-led western imperialism”.

The US, it says, is trying to destabilise China on three fronts: by portraying it as the world’s worst polluter and a danger to the environment; by parading to the world counter-revolution in China as a popular uprising and counter-revolutionaries as human rights activists; and by exploiting China’s dispute with some of its Asian neighbours over the North and South China Sea islands to rally these neighbours against China.

Russia has not been spared the wrath of western imperialism either, says the ANC. As with China, the Russian leadership is constantly portrayed in the western media and official discourse as monsters abusing human rights. In addition, counter-revolutionary demonstrations and marches are being staged and given huge publicity in the western media in order to destabilise and provoke the Russian government.

By any measure, the opinions expressed by the ANC are extraordinarily high on anti-western rhetoric despite the impact such outspoken sentiment may have on direct and indirect investment from western nations.

The UK-based Economist recently labelled the views put forward by the ANC’s top brass as “clueless and immoral” and suggested the ruling party was turning its back on human rights and freedoms to side with its new allies.

South Africa’s Institute for Race Relations (IRR) responded to the document’s release by issuing a statement in which it supported expanding economic and diplomatic relations with China and Russia, but warned that doing so did not have to be at the cost of impairing relations with the West.

“What South Africa needs is a multipolar approach to foreign policy – as is the case for the majority of other emerging markets. Instead what we are getting is an unnecessary rerun of the Cold War with policy that is unflinchingly pro-Russia and China but vociferously anti-western,” IRR chief executive Dr Frans Cronje said.

“This is economically short-sighted as we are placing all our foreign policy economic eggs in the Sino/Russo economic basket at a time when the prospects for China’s economy are in doubt and Russia is in much economic trouble.”

Economic data provided by the IRR shows that, as at December 2013, the cumulative value of foreign direct investment in South Africa from the West (excluding Canada and Australia, along with countries such as Japan and Taiwan) stood at more than R1,350 billion (€88 billion) or 85 per cent of a total of R1,600 billion (€104 billion).

By contrast, cumulative foreign direct investment from China amounted to R59 billion (€3.8 billion) or 3.7 per cent of the total, while FDI from Russia was still more limited. Figures for indirect investment paint a similar picture.

Given that the South African economy is under significant strain, with economic growth contracting by 1.3 per cent in the second quarter of 2015 and unemployment standing at 25 per cent as of this July, what is behind such views?

Last Monday, South African president Jacob Zuma called a meeting in Pretoria of foreign diplomats to reassure them the country was committed to human rights, “a better Africa and a better world”. In his address he did not mention the US, China and Russia in the context of the discussion document, but he went to great lengths to outline where he believes western policies are at fault.

While more diplomatic than the discussion document’s utterances, he maintained the refugee crisis in the European Union was of its own making, saying the decision taken by Nato to bomb Muammar Gadafy in Libya, which led to his demise, had destabilised the region.

“To achieve lasting peace in Syria, the international community must reject all calls for regime change in that country,” he said.

“The international community must not support external military interference or any action in Syria that is not in line with the charter of the United Nations. Support for non-state actors and terrorist organisations that seek to effect a regime change in Syria is unacceptable.”

Head of policy research at the IRR Anthea Jeffrey says one can see from the discussion document the significant influence of the South African Communist Party (SACP) in the ANC. The ruling party is in a tripartite alliance with it and the union federation Cosatu.

The ANC’s national executive committee, the party’s highest decision making body, is also dominated by the SACP, which holds at its core socialist and communist ideals.

The heart of the ANC’s discussion document reflects this deep ideological perspective that has always been hostile to capitalism and the West, but which was suppressed in the years that followed the end of apartheid.

“At that time the focus was on reconciliation and the need to be friendly to western countries because of the need to secure investment, but now that anti-western stance is coming to the fore again,” she said.