Outcry over election-related abductions in Uganda 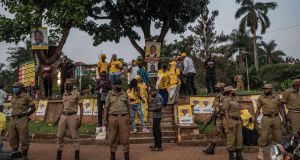 Security officers waiting for the arrival of re-elected Ugandan president Yoweri Museveni on his way back from his country home in Kampala on January 21st, 2021. Photograph: Getty Images

Outcry is continuing across Uganda over the disappearances of hundreds of civilians, many of whom were opposition supporters.

Local media has been awash with interviews with families, friends and neighbours of those who went missing over the last few months.

They describe abductions from homes, markets, taxi stops and roadsides by plain-clothed security forces who drive around in minivans known as “drones”, which have blacked-out windows and no number plates.

Some saw blood-splattered rooms left behind, indicative of the injuries their loved ones sustained. Many don’t know whether their family members are alive or dead.

In interviews with The Irish Times, one opposition supporter said he was picked up at his Kampala home, beaten by police and interrogated about his political leanings, and then later released.

Another said more than a dozen of his friends were offered jobs helping out at polling stations on election day on behalf of an independent political candidate, only to disappear during the journey there.

“I’ve gone through serious torture, but I’m lucky that I’m alive,” said a third opposition supporter, who was released from prison on Wednesday.

Foreigners have been targeted too. A US citizen named Guy Smith was arrested on Sunday in western Uganda, and accused of “alleged involvement in anti-government subversive activities”.

“Authorities should urgently investigate these disappearances and other abuses, and hold those responsible, including members of security forces, to account.”

The government have admitted to some “arrests”, with internal affairs minister Jeje Odongo adding that “in some instances it is true that there is overzealousness on the part of the soldiers that are carrying out these acts”.

President Yoweri Museveni (76) has been in power since 1986. Elections, which took place on January 14th, were accompanied by a near five-day internet blackout. As Mr Museveni was declared the winner, his main challenger Bobi Wine, whose real name is Robert Kyagulanyi, was placed under house arrest.

Mr Wine, a popular musician known as Uganda’s “ghetto president”, had gathered massive support. But Mr Museveni’s ruling National Resistance Movement party threatened that war could be sparked by an opposition win, which deterred many citizens from voting at all.

Mr Wine initially challenged the election results in Uganda’s supreme court, before withdrawing his petition, saying the courts were not independent.

He has also made a submission to the International Criminal Court, calling for Mr Museveni and other high-profile government and security figures to be charged with crimes against humanity.

At least 54 people were killed during protests last November.

Opposition have repeatedly called for donor countries to make their aid to Uganda conditional on the government respecting human rights.

A spokesman for the Irish Department of Foreign Affairs said none of that money goes directly to the government, but instead to civil society organisations and UN agencies.