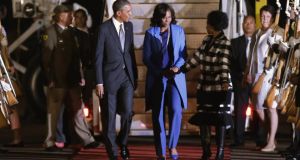 US president Barack Obama yesterday dampened expectations that he might visit a critically ill Nelson Mandela during his tour of South Africa, saying he did not “need a photo op” with the country’s first democratically elected president.

Speaking to reporters on Air Force One after leaving Dakar, Senegal for Johannesburg last night, Mr Obama said the anti-apartheid hero’s family would decide whether a meeting between the two men would be appropriate, given Mr Mandela’s medical condition.

“We’ll see what the situation is when we land,” Mr Obama said, “I don’t need a photo op and the last thing I want to do is to be in any way obtrusive at a time when the family is concerned with Nelson Mandela’s condition.

A few days ago a meeting between the two men was inconceivable because Mr Mandela’s recurring lung infection had left him in a critical condition. His deterioration on Wednesday prompted South African president Jacob Zuma to cancel a trip to Mozambique.

Great improvement
However, since Thursday Mr Mandela’s condition is said to have stabilised – although he was still gravely ill last night – so a historic meeting could still take place.

Mr Mandela’s ex-wife Winnie Madikizela-Mandela said yesterday outside her former husband’s home in Soweto that he had made “a great improvement” in recent days.

“I’m not a doctor, but I can say that from what he was a few days ago there is great improvement,” she said, before adding, “But clinically he is still unwell.”

The economic ties between South Africa and the US, with a focus on local infrastructure, will be top of the official agenda during Mr Obama’s visit, which will be his first to South Africa as president. In 2006 he visited the country as a US senator.

Also central to today’s discussions will be a bid by Mr Zuma to stop the US from reducing its overseas development assistance.

In an interview on the talks between the two heads of state, Mr Zuma’s international relations adviser, Lindiwe Zulu, said the US was considering cutting some aid packages due to the perception that South Africa had made significant development progress over the past 20 years.

Pulling the plug
“Yes, we are on our way, but you can’t say 20 years on they must begin to pull out the plug on all these things,” Ms Zulu told the Business Day newspaper.

“I’m not saying that we should forever be walking around with a begging bowl, but I think that it’s too early for them to start pulling the plug without even doing an evaluation,” she maintained.

From the US’s perspective, the goal of the three-country tour of Africa is to increase its presence on the continent, as it has fallen well behind China, which has made huge strides over the past decade, building local infrastructure in return for favourable mining concessions.

University visits
After the talks in government buildings in Pretoria today Mr Obama and his entourage, which includes a business delegation, his wife Michelle and two daughters, will visit the University of Johannesburg, Soweto campus, where he will address a group of young African leaders.

Tomorrow the US president will make his way to Cape Town where he is scheduled to give a policy speech to an audience at the University of Cape Town. He is also expected to visit Robben Island, where Mr Mandela was incarcerated for 18 of his 27 years in prison.