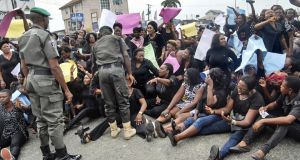 All Progressives Congress (APC) party supporters sit on the floor during a march towards the Independent National Electoral Commission Office in Port Harcourt calling for the cancellation of the presidential elections in the Rivers State. Some 2,000 women protesting against the conduct of elections in Nigeria’s Rivers state were teargassed on Monday as they tried to register their complaints with electoral officials. Photograph: AFP/Getty Images.

Nigerian president Goodluck Jonathan and his rival Muhammadu Buhari were running neck and neck on Monday after the first phase of results in an eagerly watched general election.

The initial batch appeared to confirm predictions of the most tense and evenly contested election that Africa’s biggest democracy has ever seen. The international community has called for a fair and peaceful exercise that would send a signal to the rest of the continent.

The first official results declared on Monday gave Mr Jonathan’s People’s Democratic Party (PDP) victory over Mr Buhari’s All Progressives Congress (APC) in Etiki state, but Mr Buhari then took Ogun. The pendulum continued to swing back and forth, with Mr Buhari winning five states and Mr Jonathan three plus the territory containing the capital, Abuja.

The president led by a hair’s breadth in the overall number of votes won so far.

Results from Nigeria’s two biggest cities, Lagos and Kano, both expected to favour Mr Buhari (72), had not yet been announced. But some of the southern strongholds for Mr Jonathan (57) were also still outstanding, making the outcome too close to call.

The official collation of votes was carried out at an election results centre in Abuja in the presence of party representatives, national and international election observers and media. It began two hours later than expected without explanation.

Wearing traditional white agbada and gold-rimmed glasses, national election chief Attahiru Jega occasionally grilled the returning officers. “When a polling unit is cancelled, we need to know how many votes were cancelled. So I’m going to require that you resubmit your results,” he told the returning officer for Kogi state.

The winning presidential candidate needs not only the most votes but at least 25 per cent support in two-thirds of Nigeria’s 36 states and Abuja to avoid a run-off.

Voting went relatively smoothly in a nation of 170 million people despite deadly attacks by Islamist extremists, allegations of political violence and technical glitches that forced polling stations to reopen for a second day in some areas.

Nigeria’s Transition Monitoring Group, which had observers across the country, said: “These issues did not systematically disadvantage any candidate or party.”

But in a rare intervention on Monday, US secretary of state John Kerry and his British counterpart Philip Hammond said both countries would be “very concerned” by any attempts to undermine the independence of the electoral commission and distort the will of the Nigerian people.

“So far, we have seen no evidence of systemic manipulation of the process,” they said in a joint statement from the sidelines of the Iran nuclear talks in Lausanne, Switzerland.

“But there are disturbing indications that the collation process - where the votes are finally counted - may be subject to deliberate political interference.”

Santiago Fisas, head of the European Union election observer mission, also told reporters that “there is not evidence of a systematic subversion of the voting process so far”. But he stressed that “collation is the most critical problem... We are watching this”.

Even before the collation began, the APC demanded fresh elections in the southern states of Rivers and Akwa Ibom, alleging irregularities that include missing and false results sheets and electoral officials being replaced by government officials loyal to Mr Jonathan. The national election commission said it is investigating numerous complaints.

Some 2,000 women protesting against the conduct of the elections in Port Harcourt, Rivers, were teargassed as they tried to converge on the local electoral commission offices. APC women’s leader Victoria Nyeche told Agence France-Presse: “What happened today was unprecedented... All we want is a fresh election because what happened on Saturday was a fraud.”

But fears that the election, thought to be the most expensive in African history, will be polarising and that the losing side will not accept the outcome persist. After Mr Buhari lost to Mr Jonathan in 2011, 800 people died and some 65,000 were forced from their homes by riots in the north.