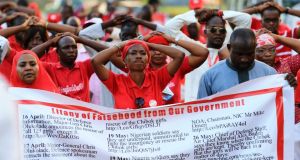 ‘#Bring Back Our Girls’ campaigners taking part in a lamentation parade last week in Abuja. Violence in Nigeria’s northeast has been on the rise since the government unilaterally announced a ceasefire with Boko Haram. Photograph: Afolabi Sotunde/Reuters

President Goodluck Jonathan promised Nigerians he would fight corruption and defeat the Islamist Boko Haram insurgency as he announced his bid to win a second term at the head of Africa’s biggest economy in a February election.

A southern Christian president heading Africa’s top oil producer, Mr Jonathan is seen as a strong incumbent despite a raft of multibillion-dollar oil scandals and his government’s inability so far to end the five- year-old insurgency waged by Boko Haram, mostly in the Muslim north.

“After listening to the clarion call of Nigerians, I have accepted to present myself to serve a second term,” Mr Jonathan told cheering supporters at a rally in the capital, Abuja.

His widely expected announcement was a formality after he had already picked up nomination papers from his ruling People’s Democratic Party last month, signalling his intent to run.

Mr Jonathan is seen as favourite because elections in the oil-dependent nation are fought more on the basis of political patronage than on policy. He will also be helped by a divided opposition which is still to chose his main challenger.

But he faces fierce criticism at home and abroad for failing to rein in corruption and guarantee security for all Nigerians.

Mr Jonathan’s announcement came a day after a suspected Boko Haram suicide bomber attacked a school in the northeast town of Potiskum, killing at least 48 people.

The president said Boko Haram, which has announced the creation of an Islamic caliphate after capturing territory in the remote northeast, had cast a dark cloud over the country.

A ceasefire with the group unilaterally announced by his government last month has failed to stop almost daily attacks.– (Reuters)