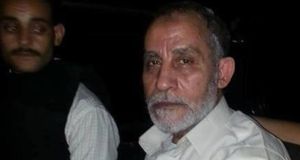 Mohammed Badie (70) was detained at a residential apartment in Nasr City in northeast Cairo “after information came to the security apparatus locating his place of hiding,” the state news agency reported.

The Interior Ministry’s Facebook page showed a picture of Mr Badie, with dark rings under his eyes, sitting in a car between two men in black body armour, with a caption confirming his arrest.

The arrest has dealt a serious blow to the Brotherhood as it tries to maintain street protests over the removal of president Mohammed Morsi.

Mr Badie’s arrest is the latest stage in an escalating crackdown by authorities on the Brotherhood in which hundreds have also been arrested.

The Brotherhood’s near daily protests since Mr Morsi’s overthrow have petered out, with scattered demonstrations attracting only hundreds, sometimes just dozens.

Mr Morsi has been detained in an undisclosed location since the July 3rd coup, facing accusations of conspiring with the militant Palestinian Hamas group to escape from prison during the 2011 uprising and complicity in the killing and torture of protesters outside his Cairo palace in December.

Mr Badie’s last public appearance was at the sit-in protest last month, when he delivered a fiery speech from a makeshift stage in which he denounced the July 3rd military coup that removed Mr Morsi.

Meanwhile, Egypt’s military-backed government is considering outlawing the Brotherhood, which has spent most of the 85 years since its creation as an illegal organisation. The government is seeking legal advice and has been under growing pressure from the media and secular politicians to declare it a terrorist group.

The daylight attack raised fears that the strategic desert region bordering Israel and the Gaza Strip could be plunged into a full-fledged insurgency.