Malawian election looks to be a four-horse race

Encumbent Joyce Banda will have to fight to retain the presidency 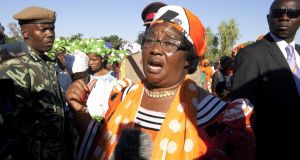 Malawian president Joyce Banda answers journalists’ questions during her final election campaign in her home village of Songani, on the outskirts of Zomba, on Saturday. Photograph: Amos Gumulira/AFP/Getty Images

Southern Africa’s first female president, Joyce Banda, must overcome stiff competition from a number of candidates if she is to emerge victorious in Malawi’s presidential election tomorrow.

In the past most Malawian voters tended to rally behind two political parties and their presidential candidates during general elections, but this year different surveys are showing that of the 12 individuals contesting the May 20th poll, four are in genuine contention.

Analysts say the race is too close to call, and the latest survey by independent research group Afrobarometer released last Friday appears to bear this out. It shows that none of the candidates are clear favourites.

Mr Mutharika is the brother of the late president Bingu wa Mutharika, whose death from a heart attack in March 2012 paved the way for Banda, the country’s deputy president at the time, to become president.

Only 19 per cent identified Banda and her People’s Party (PP), which she founded in 2011 after falling out with Mutharika, as their choice to rule for the next five years.

A further 21 per cent backed Lazarus Chakwera of the Malawi Congress Party, and 14 per cent Atupele Muluzi of the United Democratic Front.

IMF reforms
When Banda assumed office in 2012 she immediately began to implement reforms proposed by the International Monetary Fund in a bid to arrest the country’s economic decline and re-establish relations with the international donor community, which were severely damaged by her predecessor.

While she was lauded internationally for her reform agenda, which included devaluing the local currency, the resulting short-term economic hardships suffered by the population undermined her popularity at home.

According to Afrobarometer, her approval rating among Malawians has dropped from a high of 68 per cent shortly after she took office in 2012 to just 38 per cent this year.This drop in popularity has also been linked to her tendency to spend a lot of time abroad, as well as her backing of minority rights that clash with local cultural values.

In addition, the recent “Cashgate” corruption scandal, in which her office is directly implicated, has been used by opposition parties to weaken her standing with the electorate.

Malawi is one of the world’s poorest countries, and the graft case involved the theft from government coffers of tens of millions of euro of donor funds by officials.

The extent of the theft prompted donor nations to pull their direct budgetary support to the government, which amounts to some 40 per cent of the annual budget each year, until the oversight system was improved.

Banda has denied her office had any links to the scandal, which emerged last September, and since then she has instigated a crackdown that has seen 70 officials arrested and charged in relation to the theft, including some government ministers.

All four of the main parties have experience in running the country, and the messages of poverty alleviation, tackling corruption, political integrity and developing infrastructure are common themes running through each of their electioneering messages.

However, the DPP could perform well if voters recall the country’s economic performance prior to the world recession that hit in 2009. Between 2007 and 2009 Malawi’s economy grew by more than 9 per cent per annum.

In addition, the country has benefited from an annual maize surplus that has been attributed to the introduction of a farm subsidy programme by Mr Mutharika in 2005, a fact not lost on the predominantly rural population.

Southern Africa’s first female president has insisted in the weeks leading up to the poll that God will have the final say on whether she secures another term in office: if it is not to be, she maintains she will walk away.