Kerry calls for ‘inclusive, free and fair elections’ in Egypt 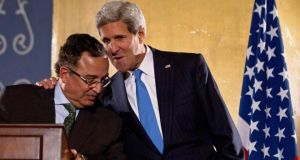 US secretary of state John Kerry participates in a joint news conference with Egypt’s foreign minister Nabil Fahmy in Cairo yesterday. Mr Kerry expressed guarded optimism about a return to democracy in the country, as he began a tour partly aimed at easing tensions with Arab powers. Photograph: Jason Reed/Reuters

US secretary of state John Kerry has said that Washington is committed to co-operating with Egypt’s caretaker government and called for “inclusive, free and fair elections” in the country’s transition to democracy.

In Cairo yesterday, he said: “History has demonstrated that democracies are more stable, viable and prosperous than any alternative. With stability comes tourism and investment and with both come jobs.”

The visit, the first since the fall of President Mohamed Morsi in July, is seen by officials and diplomats in Cairo as US acceptance that the rule of the Muslim Brotherhood, from which Mr Morsi hails, has come to an end.

By making Egypt his first stop in a nine-day tour, Mr Kerry has demonstrated the US intention to mend fences with the country’s interim authorities, angered over perceived partiality toward Mr Morsi and the partial suspension of $1.3 billion in US military aid.

Arguing that “US-Egyptian relations should not be defined by assistance”, Mr Kerry told Egyptians “as clearly and forcefully as I can in no uncertain terms, that the United States is a friend of the people of Egypt, of the country of Egypt and we are a partner . . . We support you in this tremendous transformation you are going through.”

For the first time in the history of US-Egyptian relations, a senior US official arrived unannounced in the Egyptian capital,where security was tight due to the opening today of the trial of Mr Morsi.

Mr Morsi is accused of inciting followers to attack Egyptians protesting on December 5th, 2012, outside the presidential palace against his assumption sweeping powers.

At least 10 people died in the overnight clashes, setting in train the cycle of violence that has engulfed the country.

Fourteen other senior Brotherhood figures are set to be tried with Mr Morsi, who does not recognise the legitimacy of the proceedings. It is not clear whether they will appear in the dock or be banned from the courtroom for security reasons.

The trial could ratchet up Brotherhood rallies aimed at defeating the “brutal, traitorous military coup”, as a spokesman put it. More than 1,000 of Mr Morsi’s supporters have died since he was ousted.

They call for his reinstatement and promise large-scale demonstrations to contest the trial. He has been held incommunicado since he was detained by the presidential guard, although photographs of him in captivity appeared in Saturday’s newspapers.

From Cairo, Mr Kerry flew to the Saudi capital Riyadh, where disappointment has been expressed over Washington’s previous reluctance to back the interim Egyptian government or become militarily involved in the campaign to topple Syria’s government.

On Syria, Mr Kerry is unlikely to satisfy the Saudis – who fund and arm Syrian insurgents – but his effort to reconcile with Cairo should reassure Riyadh, which has offered $5 billion to rescue Egypt’s crisis-ridden economy.