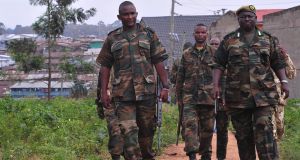 Kenyan game wardens fanned out across a residential district in the capital on Friday to track down six lions that strayed out of Nairobi National Park, which lies on the outskirts of the city.

The Standard newspaper said the lions were spotted roaming the Langata area in the middle of the night, prompting the wildlife service to send in rangers.

“Our team has been has been on ground since 3am to ensure that the issue is contained and the lions are safely back,” it said in its Twitter feed, urging members of the public not to try to capture the lions on their own.

“Lions are dangerous wild animals. Don’t confront them when you encounter them,” it said.

Nairobi National Park, Kenya’s oldest, is under pressure from the rapid growth of the capital over the last decade. Poachers have also taken their toll on the animal population, whose numbers have fallen drastically.