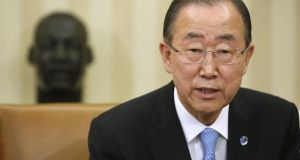 The head of the United Nations peacekeeping mission in Central African Republic has resigned after a fresh round of allegations of sexual abuse and excessive use of force by peacekeepers, UN secretary-general Ban Ki-moon has said.

Gen Gaye, from Senegal, submitted his resignation at Mr Ban’s request. The announcement comes after Amnesty International accused Minusca peacekeepers of raping a 12-year-old girl and killing a boy and his father during an operation in the country’s capital, Bangui, this month.

Mr Ban said Gen Gaye worked “so honourably” for many years but he wanted to “to show a strong example”. He plans to brief the UN Security Council tomorrow. He added that he was convening a special meeting with all UN envoys, police commissioners and force commanders to ensure they take appropriate action.

Such action would include education and training to prevent crimes but if crimes occur then an immediate and thorough investigation should take place.

“Ultimate responsibility rests with governments who send their people,” Mr Ban said. This responsibility was not only for human rights education and training but also for ensuring justice if crimes are committed, he said. “They should be brought to justice in accordance with their national laws.”

Allegations of misconduct by UN troops are not new. The United Nations cannot itself punish soldiers and rights groups complain that troop-contributing countries rarely take action, creating an atmosphere of impunity in peacekeeping missions.

Dujarric said there have been 57 allegations of misconduct reported since Minusca began in April 2014, including 11 cases of possible sexual abuse. He said those cases were being investigated.

The behaviour of international troops recently came under fresh scrutiny due to charges of sexual abuse by soldiers from France, Chad and Equatorial Guinea in Central African Republic in 2014 before the creation of Minusca.

Then in June the UN mission began probes into claims that one of its peacekeepers sexually abused an under-aged girl and allegations that peacekeepers had abused street children.

Some peacekeepers have also been sent home for excessive use of force.