Evidence of massacre 10,000 years ago found in Kenya 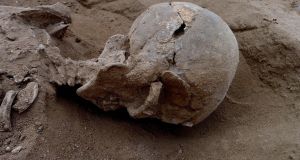 The skull of a skeleton unearthed at Nataruk, near Kenya’s Lake Turkana. Photograph: Marta Mirazon Lahr and Fabio Lahr/AFP/Getty Images

Some 10,000 years ago a woman in the last stages of pregnancy died after being trussed like a captive animal and dumped into shallow water at the edge of a Kenyan lagoon, researchers have found.

She died with at least 27 members of her tribe, all equally brutally murdered, in the earliest evidence of warfare between Stone Age hunter-gatherers.

The fossilised remains of the victims, still lying where they fell, preserved in the sediment of a marshy pool that dried up thousands of years ago, were found by a team of scientists from Cambridge University.

The evidence was graphic and unmistakable: the remains, which include at least eight women and six children, show skulls smashed in, skeletons shot through or stabbed with stone arrows and blades, and in four cases, hands almost certainly bound.

The discoveries, published on Wednesday in the journal Nature, were made in 2012 at Nataruk, a site 30km from Lake Turkana in northern Kenya’s Rift Valley, and is the earliest evidence of violent confrontation between nomadic hunter-gatherer groups.

“The deaths at Nataruk are testimony to the antiquity of inter-group violence and war,” said Marta Mirazon Lahr, from the Leverhulme Centre for Human Evolutionary Studies at Cambridge, who led the study.

“These human remains record the intentional killing of a small band of foragers with no deliberate burial, and provide unique evidence that warfare was part of the repertoire of inter-group relations among some prehistoric hunter-gatherers.”

The fragmentary remains of the children, all under the age of six except for one teenager, were found with the women’s skeletons.

Most skeletons had severe skull fractures, including extreme blunt force injuries to cheek and facial bones, broken hands, knees and ribs, arrow marks in the neck and, in the case of two men, arrow tips still lodged in their skulls and chests.

The pregnant woman was found crouched, with both forearms and ankles crossed and probably originally bound.

Her skeleton was first spotted from her fractured knees protruding above the soil.

The site was dated to the fertile period after the last Ice Age, following radio carbon and other dating tests carried out on the bones and the shell and sediment found with them.

The area is now scrub, but 10,000 years ago it was fertile lakeshore, with ample food from fishing, game from nearby forest and woodland, and fresh drinking water.

“The Nataruk massacre may have resulted from an attempt to seize resources - territory, women, children, food stored in pots - whose value was similar to those of later food-producing agricultural societies, among whom violent attacks on settlements became part of life,” said Lahr.

One man had a fragment of blade made from obsidian - a black volcanic stone that can be flaked to razor sharpness - still stuck in his skull.

The injury had not killed him, because the right side of his face and head had been smashed in with a blunt instrument, probably a wooden club.

His knees were also shattered, causing him to topple face down into the water.

Another male took two skull-crushing blows, one above the right eye, the other at the left side of the skull.

Lahr’s conclusions are grim. The extreme violence used was typical rather than a brutal exception, she said.

“Nataruk may simply be evidence of a standard antagonistic response to an encounter between two social groups at that time.”

The study’s co-author, Prof Robert Foley, is marginally more optimistic about the human condition: “I’ve no doubt it is in our biology to be aggressive and lethal, just as it is to be deeply caring and loving.

“A lot of what we understand about human evolutionary biology suggests these are two sides of the same coin.”