Aid agencies have warned that the country’s gains in food security, education and health are in jeopardy. As another crisis hits, Ethiopia could also suffer from donor fatigue 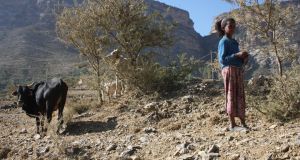 Livestock such as these goats and cows, being shepherded by 10-year-old Saba, increasingly struggle to survive. Photograph: James Jeffrey 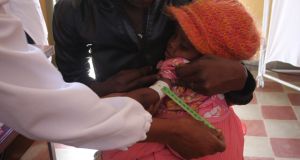 Rodas, a two-year-old girl, has her arm measured by a nurse. Its reading falls within the yellow zone, meaning that the girl is moderately malnourished. Photograph: James Jeffrey 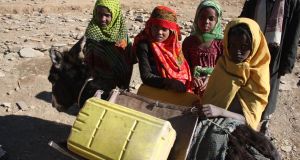 In a health clinic run by the Catholic Daughters of Saint Anne in the arid north Ethiopian region of Tigray, a nurse wraps a tape measure around the upper arm of Rodas, a two-year-old who is cradled in her mother’s arms. Its reading falls within the yellow zone, meaning that the girl is moderately malnourished, according to the nurse. As the 17-year-old mother describes not having enough food at her grandmother’s home, where she has lived since the soldier father of her child deserted them, she starts crying.

Ethiopia’s current drought is by some estimates the worst the country has seen for 50 years. The country’s government has had some success tackling it, and so far there have been no scenes reminiscent of 1984, when drought killed more than a million people here, but a crisis remains a very real possibility.

“People are not starving, but they’re close to starving. We need to address this moment right now, before it gets worse,” says Sebhatu Seyoum of a Catholic welfare organisation in Adigrat, Tigray’s second-largest town. “The government is trying its best, but it needs assistance.”

Tigray, a land of cliffs, gorges and mesas beneath bright light-blue skies, is prone to erratic rainy seasons. But the severity of this drought stems from events beyond Ethiopia: El Niño, the climate cycle that begins with the warming of the Pacific Ocean and leads to unusually heavy rain in some parts of the world and drought elsewhere.

In neighbouring Somalia three million people have been hit by crop failures and food shortages; 3.5 million have been affected in Central America. In Pacific nations about four million people may go without food or drinking water, according to the United Nations.

Initially Ethiopia tried what many in the West complain that developing countries do too little of: tackling the situation itself, using a sophisticated food-security network developed since the 1984 famine. The Productive Safety Net Programme is a welfare-for-work initiative enabling about six million people to work on public infrastructure projects in return for food or cash. There are also a national food reserve and early-warning systems.

The country’s ability to provide emergency relief has changed beyond recognition since 1984. And the circumstances accompanying this drought are very different: the famine of three decades ago was in part a result of civil war in the north. Today Ethiopia is comparatively stable politically and economically. It is capable of self-help and robust action: in response to the current drought Ethiopia opened a railway line to bring food from neighbouring Djibouti, at the mouth of the Red Sea on the Horn of Africa coast.

But proactive internal efforts began to strain late last year as the drought tightened its hold: the number of affected people doubled between June and October 2015, to an estimated 8.2 million; it now stands at more than 10 million.

Faced with such rising numbers, Addis Ababa acknowledged that it needed help. Despite Ethiopia’s modernising cities and status as Africa’s fastest-growing economy, about 80 per cent of its people still subsist on rain-dependent agriculture.

“We had one cow but had to sell that for food, while other people’s animals have lost so much body weight they can’t be sold,” says Berhe Kahsay, an 80-year-old farmer, at his home in Awo, a small Tigray town near the Eritrean border. “It’s becoming worse due to climate change. We hope God will bless us with positive change.”

The Ethiopian drought is competing for international funds with other humanitarian crises: Syria, Yemen and the migrant emergency. And the international donor system’s bureaucratic cogs started turning late after it became clear that the country’s initial go-it-alone efforts would be insufficient.

The government has been criticised for not admitting to the drought’s severity sooner while trying to maintain the narrative of Ethiopia’s great economic renaissance. It has achieved about 10 per cent annual growth for the past decade.

Ethiopia may also be up against donor fatigue at yet another drought, even though this one could damage Ethiopia’s long-term prospects beyond its immediate humanitarian needs. Aid agencies warn that significant gains made over the years in food security, education and health are now in jeopardy in parts of the country.

“We know that if we take the right steps together we can prevent the suffering of millions, as well as alleviating the overwhelming and enduring poverty that these kinds of acute emergencies tend to leave in their wake,” says John Graham, Save the Children’s director in Ethiopia.

NGOs point out that after a drought the situation always worsens from April onwards, when people have used up reserve food stocks and what little was harvested. From many of the people living in Tigray comes the ominous refrain that “the animals die first”. Already people are cutting back on food. For some a meal consists of coffee and bread, or injera – a grey spongy pancake-shaped bread – with a little salt.

Aid agencies report that severe acute malnutrition is soaring. “There are a lot of mothers coming to us saying, ‘I have nothing in my breast: give me something for my baby,’ ” says Solomon Sibhat, a 28-year-old clinical nurse at a health centre in the small town of Alitena, not far from Awo. “It has got worse. But we have nothing to help. We say we are sorry.”

Foreign financial assistance is arriving, and the Ethiopian government has committed €270 million to help prevent deaths from the drought. But the country has only half of the estimated €1.25 billion needed to combat the drought’s impact.

There is another great unknown: the possibility that El Niño will quash Ethiopia’s next rainy season. The United Nations says that could result in more than 15 million Ethiopians suffering food shortages, acute malnutrition or worse by the middle of this year unless donations increase.

“We need to vastly improve how the humanitarian system responds when warnings of a crisis are given and communities need help,” says John Graham.

Dominic Cummings says he does not ‘regret’ actions and behaved ‘legally’ 17:19
Coronavirus in South Africa: President Ramaphosa warns outbreak will get worse 16:36
Travellers arriving in Spain will not have to quarantine from July 16:15
China calls some Hong Kong pro-democracy protests ‘terrorism’ 13:51
Iranian petrol tanker arrives in Venezuela in defiance of US 13:00