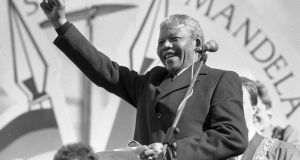 In South African politics there are certain things that one just shouldn’t do. Top of the list is alienating voters, and a close second is publicly criticising the recently deceased former president, Nelson Mandela.

Yet in the last months of 2015, with local elections just around the corner, some of South Africa’s most prominent politicians have broken these unwritten rules.

To many observers’ surprise, the first to break ranks was South Africa’s president Jacob Zuma, whose popularity ratings with the public are at an all-time low.

Days later, after being widely criticised for his comments, Zuma chose to reaffirm his position rather than let the storm pass. He insisted his view was driven by the belief that the former liberation movement is best placed to transform South Africa, as it was the ANC that brought democracy to the country in the first place.

“South Africa needs a united, strong, cohesive and effective ANC. It is in this context that I said at the KwaZulu-Natal ANC conference that the ANC comes first. I love the ANC. It does not mean I love my country less,” said Zuma.

Not surprisingly the country’s opposition parties were quick to use Zuma’s comments against him, and called on voters to give the ruling party their response at the May polls.

“This does not come as a surprise given the president’s absence of leadership when it comes to the crippling economy, growing unemployment, student unrest at the country’s higher learning institutions,” said DA leader Mmusi Maimane.

The Economic Freedom Fighters (EFF) party was even more scathing, saying Zuma’s comments were testimony that “we are heading for dictatorship”.

“This is the language of dictators who think they hold monopoly of wisdom and are indispensable,” it said in a statement.

Yet the EFF’s commander-in-chief, Julius Malema, has also found himself caught up in a verbal storm of his own making. And, his recent comments about Mandela during a visit to the UK in late November may also come back to haunt him in May.

The firebrand politician, thrown out of the ANC before establishing the EFF, began his public engagements with an explosive speech criticising Mandela and his apartheid- era ANC colleagues for the way in which they handled the transition to democracy in 1994.

Malema accused Mandela of compromising the fundamental principles of the revolution captured in the Freedom Charter, a document most South Africa-based anti-apartheid movements signed in June 1955, when he became a free man.

Malema went on to outline that after his release from prison Mandela became too close to the white men who owned the South African economy at the time, and they told him that “what he represents would not be achieved”.

“That’s when he turned against himself,” Malema maintained.

The view that Mandela sold out the revolution to secure political power is not a new one, but it increasingly holds sway with South Africa’s black youth, the demographic hardest hit by the current economic crisis.

The ANC and ANC Youth League leaders, as well as the Mandela family, have called Malema’s assertions the “ridiculous” ramblings of a populist politician who should be ignored.

Indeed, why would either politician make such controversial statements?

Analysts say Malema’s remarks attempt to reshape the poor majority’s interpretation of the past to further his future political ambitions, by outlining a root cause of their ongoing poverty: an ANC that has sold out to white capitalists that still own most of the economy.

Zuma’s comments appear designed to reassert the notion the ANC is the only movement capable of delivering an improved life for all South Africans.

However, when coupled with his increasingly poor decision making as president, they have only served to buttress the public ire building against a ruling party that is now seen by many as arrogant and out of touch with the masses.