In his first appearance since the attempted coup against him, Nkurunziza warns of threat of al Shabaab 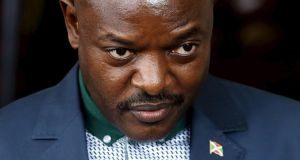 Burundian president Pierre Nkurunziza yesterday made his first public appearance in the capital Bujumbura since an attempted coup last week failed to oust him, warning of a threat posed by Islamist militants from Somalia.

The east African nation was plunged into crisis after Mr Nkurunziza said he was seeking a third term of office.

Critics said the move would be unconstitutional, and there have been almost daily protests since Mr Nkurunziza’s announcement, stirring memories of an ethnically driven civil war that ended a decade ago.

He did not elaborate, but Burundi contributes forces to an African Union peacekeeping mission battling al Shabaab in Somalia. In recent years, the group has attacked Kenya and Uganda, which also provide troops.

A spokesman for the Islamist group said Mr Nkurunziza’s remarks were “dumbfounding” and said the problems in Burundi were “clearly domestic”.

“We think that this is an attempt by him to appease his people, who are standing in the streets protesting against his dictatorship, or to divert the world’s attention from him while he possibly prepares his mass revenge,” Sheikh Ali Mahamud Rage said in a statement.