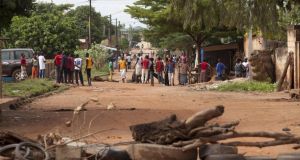 Anti-coup protesters set up roadblocks in Ouagadougou, Burkina Faso, on Thursday. Leaders of a coup in Burkina Faso said on Friday they had freed the president and reopened borders. Photograph: Joe Penney/Reuters

The military junta in Burkina Faso freed interim president Michel Kafando and two ministers as international pressure intensified on the army to end the crisis in Africa’s fourth-biggest gold producer and hold a presidential election next month as planned.

The releases came after members of the military council met African, European, United Nations and US diplomats in the capital, Ouagadougou. Presidents Macky Sall of Senegal and Thomas Yayi Boni of Benin began mediation efforts Friday on behalf of the Economic Community of West African States.

The African Union suspended the country’s membership of the bloc and called for all military and security cooperation to be frozen.

“There was such an immediate and overwhelming response from international partners that we will probably see some concessions,” Cailin Birch, an analyst with the Economist Intelligence Unit in London, said Friday by phone. “But it’s incredibly unlikely the elections will be held in the near term.”

“Last year during the mass protests the military let the leader step aside rather than preserve him in power in a way that was unique for west and central Africa,” Birch said. “The fact that it has been reversed is really a failed opportunity.”

Shops and businesses remained closed Friday as sporadic gunfire rang out and troops patrolled the streets of Ouagadougou. Three people died of gunshot wounds and at least 60 were injured on Thursday, Robert Sangare, managing director of Yalgado Ouedraogo hospital, the largest medical facility in the capital, said by phone.

Protesters disregarded a night-time curfew in the country’s second-biggest city, Bobo Dioulasso. The soldiers moved against the interim government three days after the Commission for National Reconciliation and Reforms, headed by Catholic Archbishop Paul Ouedraogo, submitted a report to the transitional government calling for the dismantling of the 1,200-member elite presidential guard, known by its French acronym RSP. – Bloomberg