Militants believed to be behind abduction that would violate ceasefire 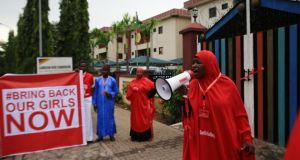 Campaigners shout slogans during a rally in Abuja, calling for the release of the Chibok school girls who were abducted by Boko Haram. Photograph: Afolabi Sotunde/Reuters

Suspected Boko Haram militants kidnapped at least 25 girls in an attack on a remote town in northeastern Nigeria, witnesses said, despite talks on freeing over 200 other female hostages they seized in April.

John Kwaghe, who witnessed the attack and lost three daughters to the abductors, and Dorathy Tizhe, who lost two, said the kidnappers came late in the night, forcing all the women to go with them, then later releasing the older ones. The attack cast further doubt on government reports that it has secretly reached a temporary ceasefire with the rebels to secure the release of more than 200 schoolgirls they are holding hostage.

Nearly a week after the government announced a ceasefire deal with Boko Haram, which it said would include the release of the girls kidnapped from the secondary school in Chibok in northeastern Nigeria in April, there is still no sign of them being freed.

Talks to release the schoolgirls are taking place this week between the government and a Boko Haram representative in the Chadian capital N’Djamena, but they are shrouded in secrecy.

In a separate attack, a bomb exploded late on Wednesday at a bus station in the town of Azare in northern Nigeria’s Bauchi state, killing at least five people and wounding 12, police said. They did not say who was behind the attack, although Boko Haram is likely to be the prime suspect.

The insurgents have repeatedly bombed public places since launching an uprising demanding an Islamic state in religiously mixed Nigeria five years ago. They have stepped up their campaign this year, setting off blasts across the country that killed hundreds.

They have killed many thousands and are increasingly targeting civilians in violence seen as the biggest threat to the stability of Africa’s biggest economy and top oil producer.

“Five persons burned beyond recognition were certified dead, while 12 others sustained various degrees of injuries,” Bauchi police spokesman Haruna Mohammed said in a statement. “The entire surrounding [area] has been cordoned off . . . No arrest has yet been made, but an investigation has commenced.”

The attacks have raised doubts over the ceasefire, although Boko Haram is so factionalised it is possible a truce has been reached with one group while others continue with violence.– (Reuters)