Outbreak has killed 467 people in Guinea, Liberia and Sierra Leone since February 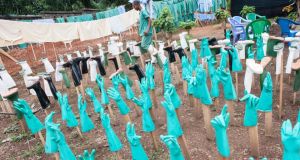 Treatment area in Gueckedou, Guinea. After being in the the isolation zone, clothing and boots are disinfected with chlorine. Photograph: Sylvain Cherkaoui/Cosmos /Medecins Sans Frontieres (MSF)

West African states lack the resources to battle the world’s worst outbreak of Ebola and deep cultural suspicions about the disease remain a big obstacle to halting its spread, according to ministers.

The outbreak has killed 467 people in Guinea, Liberia and Sierra Leone since February, making it the largest and deadliest ever, according to the World Health Organisation.

West African health ministers meeting in Ghana to draw up a regional response mixed appeals for cash with warnings of the practices that have allowed the disease to spread across borders and into cities.

Abubakarr Fofanah, deputy health minister for Sierra Leone, a country with one of the world’s weakest health systems, said cash was needed for drugs, basic protective gear and staff pay.

“In Liberia, our biggest challenge is denial, fear and panic. Our people are very much afraid of the disease,” Bernice Dahn, Liberia’s deputy health minister, told Reuters on the sidelines of the Accra meeting.

Authorities are trying to stop relatives of Ebola victims from giving them traditional funerals, which often involve manual washing of the body, out of fear of spreading the infection. The dead are instead meant to be buried by health staff wearing protective clothing.

Neighbouring Sierra Leone faces many of the same problems, with dozens of those infected evading treatment, complicating efforts to trace cases.

The Red Cross in Guinea said it had been forced to temporarily suspend some operations in the southeast after staff working on Ebola were threatened.

A Medecins Sans Frontieres centre in Guinea was attacked by youths in April after staff were accused of bringing the disease into the country.

Ebola causes fever, vomiting, bleeding and diarrhoea and kills up to 90 per cent of those infected. Highly contagious, it is transmitted through contact with blood or other fluids.

The WHO has flagged three main factors driving its spread: the burial of victims in accordance with tradition; dense populations around the capital cities of Guinea and Liberia; and bustling cross-border trade across the region. Health experts say the top priority must be containing Ebola with basic infection control measures such as vigilant handwashing and hygiene, and isolation of infected patients.

Jeremy Farrar, a professor of tropical medicine and director of the Wellcome Trust, an influential global health charity, said people at high risk should also be offered experimental medicines, despite the drugs not having been fully tested.

“We have more than 450 deaths so far, and not a single individual has been offered anything beyond tepid sponging and ‘we’ll bury you nicely’,” Mr Farrar told Reuters in an interview. “It’s just unacceptable.” – (Reuters)