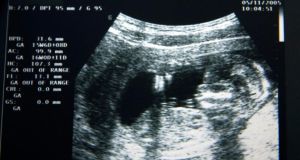 In an interview with Spanish daily newspaper El Mundo, Lupe (her surname is not given) recounts the circumstances of a 2012 pregnancy, when she was living with her partner in Galway.

When she was 11 weeks pregnant she started bleeding. “They told me there a small wound in the uterus and gave me an appointment in two weeks’ time,” Lupe said.

“But I was worried and I went to a private clinic where they gave me an appointment in nine days.”

When she and her partner took their young son to the clinic, hoping to show him a scan of his little brother, it was found the foetus had no heartbeat.

Lupe was told to come back two days later in order, she hoped she said, to remove the foetus.

However, when she returned and showed the scan to the doctor he said he needed another scan in one week.

“I asked him why and he said it was to rule out any errors and gave me an appointment for a week later. It was the worst week of my life. Knowing you are carrying your dead child inside is terrible.”

When she came back again, 14 weeks after getting pregnant, it was confirmed the foetus was dead.

“I asked the doctor how old the foetus was and he said four or five weeks. And I was 14 weeks. So I had been carrying him inside me dead for 10 or 11 weeks.

“[The doctors] offered his condolences and asked what I wanted to do. I said he had been dead for two months, that I was exhausted, that there was danger of infection and I wanted to finish the whole thing.”

Lupe said she was then told another scan was necessary in a week’s time to make sure the foetus was not still growing.

“When I demanded an explanation, he said he understood which country I was from, but that he was the doctor.

“It was a clear reference to the fact that I’m from a country where abortion is legal,” she said.

“In that waitingroom I understood that they don’t care about the woman, that when we are pregnant, women are aren’t humans, we’re incubators. In Spain this wouldn’t have happened to me, not even under Franco.”

Lupe flew back to Spain and had the medical procedure to remove the foetus.

The clearest explanation Lupe feels she received in Galway was from a female doctor who said her colleagues’ “hands were tied” legally.

“They didn’t want to carry out an abortion,” she said.

“If your body expels [the foetus], fine. If it doesn’t, then it depends on divine will.”

Ireland, she said, “is living a kind of religious fundamentalism which is in the constitution: from the moment it is conceived, the foetus has the same rights as the mother… But in the end it has more rights than her.”