The Most Reverend Diarmuid Martin, Archbishop of Dublin, leads the annual “Way of the Cross” procession in the Phoenix Park for Good Friday. The event is organised by the Catholic movement, Communion and Liberation. Video: Bryan O'Brien 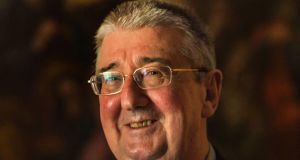 A delegation sent by Rome following the publication of the Murphy and Ryan reports effectively held up reform of the church in Ireland and “set expectations it was never going to realise”, Catholic Archbishop Dr Diarmuid Martin of Dublin has said.

They were dispatched by the Vatican following the publication of the reports in 2009 to establish what went wrong in the Irish church.

The apostolic visitation, which comprised seven high-powered teams, “froze the Irish church at a particular moment” and “actually, in some ways, delayed reforms in the Irish church”, Archbishop Martin said.

The Murphy report examined the handling of allegations of clerical child sex abuse in the Dublin archdiocese and was published in November 2009. The Ryan report on abuse in residential institutions for children was published in May of the same year.


Unrealistic expectations
Dr Martin said the visitation from Rome “set expectations it was never going to realise and I think there are lessons to be learned for future events of that kind”.

In an extensive interview with The Irish Times to mark the 10 years since he became Archbishop of Dublin on April 26th, 2004, Dr Martin also referred to the debate about pluralism in education.

He said he was not happy about all teachers being forced to teach religion in schools.

“I’m not happy with somebody who really doesn’t believe being forced to be the religious education teacher in a school.”

Dr Martin said teachers “should be able to move to the type of school where they would be happier in accordance with their own conscience and convictions”.

He felt “a more robust collaboration between the Department [of Education] and the church would make these things move a little more quickly.”

In the context of Pope Francis’s call for a poor church for the poor, he said of Archbishop’s House in Drumcondra: “My living quarters are smaller than his. He uses the Vatican to receive people there all the time.

“My staff is half that of my predecessor. I probably cook more meals for myself than he did.

“I look after myself [and] my own shopping”