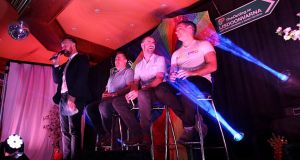 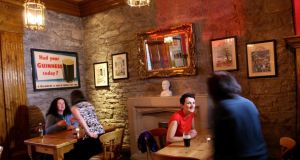 The organisers of the Outing were “walking on sunshine” on Sunday as they celebrated record numbers attending the third annual matchmaking event for the LGBT community in Lisdoonvarna.

Thousands of people descended on the north Clare town for the weekend to be entertained by Panti Bliss, Brendan Courtney, Katrina Leskanich from Katrina and the Waves and others.

Leskanich entertained partygoers on Friday with tunes including her 1980s hit Walking on Sunshine at party HQ at the Hydro Hotel, and the venue was heaving again on Saturday night when Brendan Courtney presented a live version of Blind Date.

Prior to the two-hour turnaround required to transform into Panti Bliss on Saturday evening, Rory O’Neill remarked that “there is nothing like this festival anywhere in the world – I think it has real potential to appeal to international visitors”.

“The first year, everyone was a little nervous would anyone turn up, but it is getting bigger every year,” he said.

On Saturday, the town centre was bedecked in pink love-hearts and rainbow-coloured bunting, and O’Neill said: “The town really makes a lot of effort. I think the first year they were a little bit suspicious, but now [they’re] thinking ‘this is grand’.”

He believed the festival was benefiting from the lingering feelgood effect for the LGBT community brought about by the yes vote in the Marriage Equality Referendum.

However, Lisdoonvarna matchmaking king Willie Daly said he had yet to have success among LGBT attendees. “It is a new beginning for me and requires me to adjust my perspective and my mind-set. When a man comes up to me this weekend, it isn’t a woman he is looking for – it is a man.”

White hotel group managing director Marcus White said Mr Daly’s buy-in to the Outing “has been vital to its success”.

Mr White said numbers at the Outing were up 25 per cent on last year.

“When we started it first it wasn’t so cool, but the risk has paid off.”

One of the attendees this year was Kellie Maloney, formerly boxing promoter Frank Maloney. Maloney underwent her gender reassignment procedure earlier this year and, speaking on Saturday night, she said: “It is a wonderful event. I have had just the most amazing time.”

At a dance at the matchmaking festival, Maloney confirmed she was asked to dance by a number of farmers.

Smiling at the memory, Maloney quipped: “I could have ended up a farmer’s wife.”

Dubliner Joe Hayes (67) was attending the festival with a number of friends on Saturday night. He said he didn’t come out as a gay man until he was 51. “I loved it here last year and I like this year even better. It is much more livelier this year.

“I’m not too sure if much matchmaking goes on, but it is very social and people are having a great time.”

Clare businessman Donnie Garrihy operates a ferry service out of Doolin. He said the locals deserved great credit for buying into the festival.

“To have a gay and lesbian weekend is absolutely fantastic. I don’t know of any other town or village which has done this. Everyone has bought into it. We had a summer from hell with the rain and the high winds, but we’re having an Indian summer right now and everyone is walking around with a smile on their faces.”