Tracie Joyce is a journalist with Travellers’ Voice magazine and is one of four Traveller women mentored by businesswoman Norah Casey in the new RTÉ TWO series 'Norah’s Traveller Academy'. Video: Bryan O'Brien 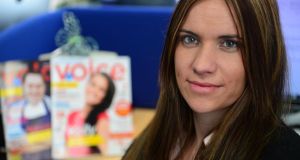 According to Tracie Joyce’s mother, she “came out talking”. Often asking questions. It made journalism an obvious career choice.

“Writing is something I always wanted to do. I love being out there, meeting and greeting people. I definitely made the right choice.”

Joyce is one of four Traveller women who feature in Norah’s Traveller Academy, a television series which follows entrepreneur and mentor Norah Casey as she supports these young women in their chosen business.

Reporter Tracie Joyce is first up, venturing into The Irish Times as part of the first programme in the four-part series. She is followed by artist Leanne McDonagh, designer Ann Rose Mongan and beautician Christine Collins.

At first, Joyce was wary of appearing on the programme.

“I didn’t want to do the show. It was meant to be about four girls going into business on their own, but that wasn’t my situation. I didn’t have my own business.”

Joyce works as a journalist on Travellers’ Voice, a bi-monthly publication based in Athlone.

But although she embraces being a journalist, she’s not sure the media is doing a good job. “Some media only concentrate on the negative. There are Traveller men in the army, working as doctors and so on, but where’s the recognition?”

She is happy Travellers’ Voice is providing that recognition through its “authentic view of Travellers and by reporting on news events that aren’t featured in mainstream media”.

“If other media would recognise the contribution of Travellers like we do, things would improve. Travellers get such a negative rap in the media that they are reluctant to talk to them. If the media focuses on positives, this might change.”

Joyce started in the magazine four years ago, doing work experience. She’s worked her way up and is now no stranger to landing big-name interviews with idols of hers such as chef Neven Maguire. She has also met Robbie Keane and Kian Egan. Meeting President Higgins was “a pure honour”, she says.

She was also invited to the Mansion House in Dublin to release the video she directed showing Travellers blasting misconceptions.

“Never in a million years I think I’d be in the Lord Mayor’s house making a speech,” she says.

The 25-year-old from Roscommon had parents who were open to difference, she says. “Daddy is a Traveller and my mother is a settled woman” – that was unusual, says Joyce.

She lives in a house, but says travelling is not an option everyone can take up as there are “so many restrictions now”.

Her son Calum has started school, and she’s sure that her having a full-time job as a journalist will make a difference to him, especially as she is a single parent.

Meanwhile, changing attitudes to Travellers is top of her agenda.

Settled people can stop using the “K” word, for a start, she says.

Having her son has made this change even more vital, she says. “Calum is in a school now and he’s mixed in with every type of child under the sun. He’s in with settled, Travellers, Polish children, all sorts of children. There is no difference. When Calum gets older, I want this discrimination all gone.”

Joyce’s appearance on Norah’s Traveller Academy has ushered in a new era for the magazine. It has a new name, a new look, comes out every two months and has reduced its cover price to €2.95.

Joyce is clear what she wants now.

“I want my child to have a great life. We were always happy growing up. We weren’t rich, but we were happy. I just want that for my son – to give him the best I can. If I can do that, that’s me happy, and I need a full-time job to do that.”

Norah’s Traveller Academy is on RTÉ 2 at 9pm, Thursday