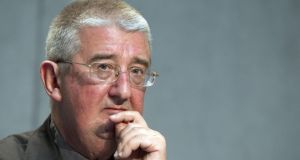 Progress in divesting Dublin’s Catholic Archdiocese of some of its schools “is not easy”, a spokeswoman has said.

“However, the diocese remains committed to moving forward and is in regular communications with the Department of Education and Skills on the discussions taking place,” she said.

Meetings had been taking place at a local level with stakeholders “with a view to implementing the diocesan policy of divesting Catholic schools,” she said.

Her comments follow those of Archbishop of Dublin Diarmuid Martin this week when he said that the situation, where he was patron of about 90 per cent of all primary schools, was “no longer tenable. It doesn’t respect reality.”

He noted that in the 2011 census 25 per cent of people living in the archdiocese registered as other than Roman Catholic.

Radio interview
In a Newstalk radio interview with Pat Kenny he said “the big problem is when you go and do the surveys, parents tend to say, ‘well, we don’t want to divest these schools.’ Then you have to ask what actually is going on? Are they saying ‘We don’t want change.’? Are they saying ‘well, we don’t know what might come in its place.’? So I think the debate has to go deeper.”

He said communities “should be more radically honest with themselves as to what they want. I don’t want Catholic schools-lite.”

If people wanted “their child to go to a Catholic school because then they can make their First Communion, and then leave, you know, have no more contact with the Church, a lot more debate has to go on.”

It was the case that “very often, particularly in the schools, arguments are made which are not really about religion, they’re about a good school . . . And I understand parents want that.”

But, he added, “if people do not move towards a divesting and new arrangements within our communities, then the possibility of maintaining Catholic schools will probably die out.”

If most parents were asked, “they want a good local school . . . I think most people are very happy to have their child go to a local school, and we have extraordinarily good primary schools in the Dublin area,” he said.