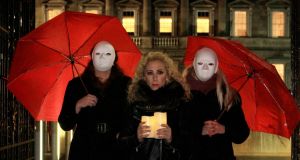 “If it is the Government’s aim to stop prostitution by ending demand, then why are they increasing the penalties and further criminalising workers?” asks Kate McGrew from Sex Workers Alliance Ireland. Photograph: Nick Bradshaw

Sex workers could be jailed for working together indoors for safety reasons under new legislation, Sex Workers Alliance Ireland (SWAI) has warned.

Speaking at the Fine Gael Ard Fheis, Kate McGrew from SWAI said under new legislation a client does not face a prison sentence while a sex worker can be criminalised.

“Our Government keep telling us they want to protect the most vulnerable women by criminalising the men that buy sex from them, but under this new legislation a client will not face a prison sentence yet a worker will,” said Ms McGrew. “The Government has now doubled the fines and doubled the prison sentence for sex workers caught working together in an apartment or house. If it is the Government’s aim to stop prostitution by ending demand, then why are they increasing the penalties and further criminalising workers?”

The Criminal Law (Sexual Offences) Bill 2014, published in November 2014, contains measures to criminalise the purchase of sex, along the lines of the approach taken in Sweden, and other Nordic countries.

Critics of the bill have said the approach fails to acknowledge the position of those who choose to be in the sex industry, whether because of a lack of other economic options or because they want to.

Ms McGrew called on the Government to introduce a two-year review of the legislation to evaluate its impact on the lives and welfare of sex workers, adding that in Sweden, where the law was introduced in 1998, the legislation is regularly evaluated.

“Many sex workers have spoken out about how laws likes this hurt them,” she said. “An evaluation would ensure responsible legislating on a complex issue.”

Ms McGrew criticised the Government for pursuing the legislation without conducting independent research into the impact of criminalisation or without “meaningful consultation” with sex workers.

“We have repeatedly told the Minister for Justice and the Irish Government we sex workers do not want criminalisation, we want our human rights and safety protected,” she said. “The proposed legislation goes against international best practice and advice from expert organisations including Amnesty International, the World Health Organisation and UN AIDS, who advocate instead for a human rights based, harm reduction approach.”

“Do the Government and TDs and Senators actually think they know more about the impact and effect of criminalisation on the rights of sex workers than Amnesty International and sex workers themselves?” asked Ms McGrew. “Let’s be clear this Bill does nothing to decriminalise workers. If these changes so blatantly target sex workers, then who is this legislation for?”