Accommodation hunters say prices are high, quality is low and flats are small 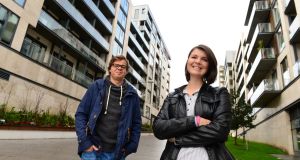 Marc Murray and Orla O’Carolan want to move in together. They have been looking online for three months and hope to commit to a year-long lease “before it gets any crazier”.

They are among those viewing one-bed apartments in the Elmfield complex on the Ballyogan Road in Dublin 18. Marketed as luxury lets, the apartments have the Gallops Luas stop just outside. They are spacious first lets and have both main and ensuite bathrooms. They asked-for rent is €1,500 per month.

“We’re steering clear of dives in Rathmines. We don’t mind being a bit further out so long as it’s close to transport for work,” says Murray.

“What I’ve noticed with viewings now is that they’ll have them on at lunchtime or at say 4pm, at random times when not everyone can get to them because of the competition. If you do turn up, there are at least ten people there, and then it all comes down to what it looks like on paper. They take your references and show them to the landlord. Ultimately it’s up to them,” says O’Carolan.

Matous Machacek moved to Dublin from the Czech Republic more than a year ago, and his girlfriend Barbara Saifrtova has just joined him. However, despite having deposit money, savings and references ready, they’re finding similar issues with how they appear on paper.

“I work at Microsoft so my income is quite good but Barbara has just moved here and she’s going to find a job but it will take some time. A few times they’ve already told us that all residents above 18 years old have to prove their income,” he says.

Rental rates by location across Dublin

Conor Lynch and Alice Fourrier work for the same tech company. They were both looking for one-bed apartments, but were finding very few available at rents they were willing to pay, and thought a two-bed would be an easier find. “Finding a flat on your own is either super-expensive or you’ve just got loads of competition,” says Fourrier.

They are viewing a two-bed house on Penrose Street in Ringsend, asking €1,700 per month. It has a small yard to the rear and a parking space in front, though the house itself is described as small by every person who comes to view it.

Though she has found rent in other European cities as expensive as Dublin, she says the quality here is very low. “Even if you’re paying a very high rent in Dublin, the quality of the flats won’t be that good, or they’ll be super-damp, or they won’t be renovated.

“Because the landlords know that they can get anyone, and there’s a really long queue behind you, you can’t really complain about it or have stuff fixed.”

Katharina Malko says in Germany, where she’s from, you can rent a whole apartment for €700, which is what she’s currently paying for a room in a house shared with three others. She’s found the rental market in Ireland much more inconsistent in terms of quality than anywhere else.

“It’s expensive for what you get because there are some houses that look very nice and look very new furnished, and they have the same price as something that hasn’t been taken care of.”

Debasmita Kundu is from India and moved to Dublin to work in a bank recently. She has been searching for a one-bedroom or studio apartment for three weeks. She is finding it near impossible to find something affordable on her own.

“Usually for what I’m looking for, they’re asking for more than €1,000 which is very difficult for a single professional to sustain. But it’s what you must pay if you want to find a good, decent, comfortable and clean place to stay,” she says.

Kundu is one of the people viewing a one-bedroom apartment in a house on Sallymount Avenue, off the main street in Ranelagh, Dublin 6. The apartment is not spacious and the washing machine is communal. Rent has been set at €1,000 per month.

As well as high rents, Kundu is finding most apartments for one are very small. “There is too much demand and not enough apartments so what some people have done is to create small, small, small apartments. They call it a studio and then demand an exorbitant price, because demand is so high that they know someone will take it and it’s just a matter of time.”

Naveen says he has found high rents for properties he believes are sub-par quality. However, even in apartments he’s settled for, he says the competition is too stiff.

“Wherever I go many people are turning up to houses and the landlords are not favouring us. They tell us they’ll get back to us and they never get back to us. That’s my main problem,” he says.

A renter’s view: ‘If I’d known, I’d have thought hard about moving back to Dublin’

Generation Rent: ‘It’s totally out of your control’

Rental crisis: Why landlords are struggling to make money