It’s not a simple construction problem. The bedsit ban and unfair taxes are also to blame

Archive Video: Less construction, greater internal migration and a pickup in the economy are some of the factors leading to a housing crisis characterised by a severe shortage of accommodation combined with rising rentals and house prices. 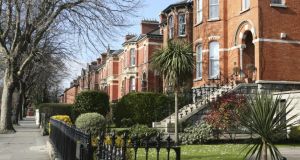 Irish Rents have been rising steadily since 2013, particularly in Dublin. Rents in the capital rose 9.2 per cent in the year to the end of June, and rents across the State went up by 5.8 per cent, according to the Private Residential Tenancies Board.

Stop building homes and eventually you’ll run out of them. We’re building houses at 1970s rates for a population that’s 55 per cent higher than it was in that decade. We’ve plenty of ghost estates – but they were built where they were not needed. Urban Dublin never had much of a problem with ghost estates. In comparison, Co Cork still has 130, and Co Donegal still has 64. No houses means nowhere to buy and nowhere to rent.

2. End of the living-over-the-shop scheme

This was an extraordinarily generous scheme that could have provided more rental accommodation where it was needed and brought new life to moribund town and city centres. Ireland’s urban streets are full of old empty upper floors. The scheme offered 100 per cent tax relief for the cost of converting spaces over shops into apartments. The take-up was abysmal. Buildings’ owners cited onerous regulations, and too few streets were included in the scheme.

5. Ending the construction of social housing

Everyone blames the last government for ending social-housing construction and forcing local authorities to rent from private landlords. But the current lot haven’t done much to reverse that. Of the 100,000 social-housing units the Government says will be put into the system by 2020, only 35,000 will be built; the rest will be leased or rented. People on low fixed incomes don’t belong in the private sector, at least not in its current form.

6. Too many small apartments

In December 2007 Dublin City Council changed its development plan to increase the minimum size of one-bedroom apartments to 55sq m, up from the national standard of 45sq m. Recently there has been a clamour for it to reduce the minimum size, which it is proposing to do in limited circumstances. But we already have a preponderance of small one-bed apartments, many built between 1999 and 2004. Too many small apartments means that anything decent is too expensive.

Almost 85 per cent of Dublin flats inspected in a three-year programme to root out substandard private accommodation failed to meet minimum standards. Problems included fire safety and rat infestations. Old flats are not required to meet the size rules of new apartments, and the flats inspected were half the general minimum size of 55sq m on average. If these deteriorate so much that they have to be shut down, this will further compound the problem.

8. The banning of bedsits

A bedsit does not have to be a byword for substandard accommodation. The 2013 ban relates to flats that do not contain a bathroom. Taking these units out of the system makes sense in the long term, but the ban has reduced the supply of lower-cost accommodation. A more sensible approach might have been to ban the units from being relet once the existing tenant had left rather than insisting that they be upgraded or the tenancy ended.

The Government has finally announced a plan for dealing with spiralling rents, but the extended public toing and froing frightened landlords. That fear probably prompted many landlord to raise their rents in recent months. Tenants and landlords would benefit if politicians came to an agreement behind closed doors and then stuck to it.

Rebooting the construction industry has been painfully slow. The Budget announcement that 20,000 homes would be built on sites controlled by the National Asset Management Agency by 2020 should speed things up, and that 90 per cent will be built in Dublin should ease pressure on the rental sector. But more homes are needed far more quickly. One issue is the use of old-fashioned construction methods. Greater use of modular, factory-built housing, assembled on site, could considerably speed up delivery.

This article is part of an Irish Times series on the problem issue of renting in Ireland. It  begins on Saturday November 14th in Weekend Review and continues until Tuesday 17th

A renter’s view: ‘If I’d known, I’d have thought hard about moving back to Dublin’

Generation Rent: ‘It’s totally out of your control’

Rental crisis: Why landlords are struggling to make money