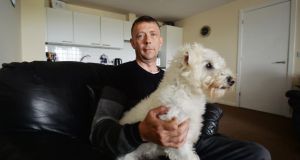 Tom Kelly, with his dog Buster. He and his partner, Leanne, have been told by the Department of Social Protection that rent allowance is not allowed in Ballymun. Photograph: Alan Betson

A Dublin landlord who let his apartment to a couple in receipt of rent allowance has been told by the Department of Social Protection he cannot house them.

The apartment is in Ballymun and he has been told he cannot accept rent allowance as the area is a “regeneration area”.

Tom Kelly and Leanne Healy are appealing the decision.

Their landlord, John Connolly of All Let Property Management, describes them as “top-class, very decent people” and says they can “pay what they can manage until the appeal is decided. We don’t want to see them out on the road”. The rent is €750 a month.

Mr Connolly said he was unaware of the rule, which exists to promote “greater diversity of tenure” in an area dominated by social housing.

The couple had been renting in the East Wall area until April. “The landlady told us she needed the house back for her son. She gave us two months’ notice.”

Tom had to give up his job as a landscape gardener in 2012 when he developed health problems after donating a kidney to his nephew.

“We started looking on the internet as soon as we got the notice. Finding somewhere that would accept rent allowance was near impossible. We saw this place when the ad went up and we came and looked immediately. I just said to John, ‘if you can give it to us we’d love to take it’. So he said ‘no problem’. That was a Monday and we moved in Thursday, April 24th.”

They applied for rent allowance for the new address and on May 9th got a letter telling them that, as the apartment was in the Ballymun Regeneration Area, rent allowance was not payable.

Under section 25 of the Social Welfare Act 2007, the Minister for the Environment can identify areas to the Department of Social Protection where rent allowance should not be payable, being areas “of regeneration for the purpose of providing for greater social integration”.

A spokesman for Ballymun Regeneration Ltd said the company had sought and was granted the exclusion of rent supplement recipients coming into the area in 2008. He said 17 per cent of households in the area were rented from private landlords and 52 per cent from Dublin City Council. BRL’s programme was to promote “greater diversity of tenure”.

Tom’s social worker in Beaumont hospital has written to the department outlining his health difficulties.

to find accommodation that will accept rent allowance,” she writes. “I would be grateful if you would consider his request for rent allowance under the circumstances.”

A spokeswoman for the department said the non-payment of rent allowance in Ballymun was not an “open-ended arrangement” and would be reviewed.

“We like Ballymun,” said Tom. “Our greatest concern now is that we would fall homeless. If we have to leave here, there’s nothing available for people like us.”