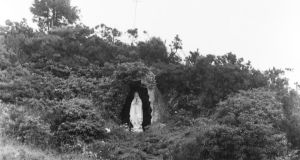 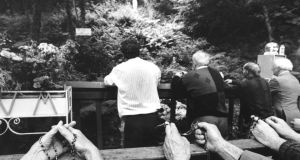 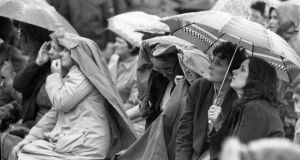 Apparitions of the Virgin Mary at the grotto in Mount Melleray, Co Waterford, 30 years ago in August 1985 are being marked by evening prayers and processions there all this week and continuing until Monday.

On July 22nd, 1985, it was also claimed a statue of Mary at Ballinspittle, Co Cork, had moved at the grotto.

This sparked huge attendances there and a spate of similar claims of moving statues at about 30 locations across the country. It is estimated that subsequent to July 1985 about 100,000 people visited Ballinspittle in the hope of seeing the statue move.

They were Ursula O’Rourke, (then 16), who was the first person to have reported an experience at the grotto, which was built by Cistercian monks in 1982.

Tom Cliffe (then 12) and his cousin Barry Buckley (then 11) both claimed to see the Virgin every night over five nights. Local farmer Michael O’Donnell (then between 45 and 50) was the first to report having received a clear public message.

During the nine days, it was claimed Mary gave the visionaries messages for the Irish people and the world. They also claimed to have been allowed to see some supernatural events.

The messages included a warning that “God was angry with the world and how we must change. If we don’t change, then, she said, ‘The Devil would take over God’s church in 10 years’ .” She called on all to “preserve Sunday for prayer”, called for “peace and prayer and no more fighting in the world” and said she wanted “the Irish people to spread my message to the world”.

It was claimed she recited the rosary with the crowds in attendance and that she avoid the name “Mary” in rosary prayers.

Nowadays the area around the grotto is reserved for devotion and is capable of accommodating about 150 people.

Among those who visited Ballinspittle in 1985 was avowed agnostic and former minister for posts and telegraphs Dr Conor Cruise O’Brien. For two minutes, he stared silently at the lighted statue before saying: “As far as I can see it’s a perfectly genuine statue and is motionless as you would expect a statue to be.”

However, he also expressed surprise at how “middle class” the people in attendance there were.

The Catholic Church leadership at the time advised all such claims of apparitions and moving statues should be treated with caution.