General assembly passes resolution that could have ‘legal implications’ if ignored 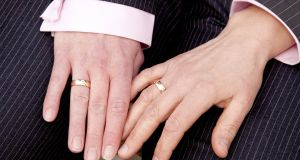 All Presbyterian marriage ceremonies in Ireland must now include a statement that such a union can only be between a man and a woman. File photograph: Getty Images/iStockphoto

All Presbyterian marriage ceremonies in Ireland must now include a statement that such a union can only be between a man and a woman.

This decision was taken at the Presbyterian church’s general assembly in Belfast on Wednesday afternoon and has immediate effect.

General assembly clerk Rev Trevor Gribben told delegates that the statement had to be read at all such ceremonies “from here on”, and, if this was not done in the Republic, “there could be legal implications”.

He said such a statement was “now the law of the church”.

He was speaking after the delegates passed a resolution that such a statement be included in all Presbyterian marriage ceremonies.

It read: “Since the beginning of creation God, in his gracious purpose, provided marriage as the accepted way in which a man and a woman may come together as husband and wife.

“This is the only basis on which marriage can take place within the Presbyterian church in Ireland.”

Rev Donald Watts told delegates that, when taking part in marriage ceremonies, Presbyterian ministers were “acting purely in a pastoral role to assist two of our members to marry”.

They were “not agents of the state”, he said.

Rev Donald Watts said that, following the State’s same-sex marriage referendum last year, he and other Presbyterian representatives met government officials in Dublin who were anxious “to protect freedom of religious practice” in the Republic and “wanted to ensure the position of the churches be maintained and protected”.

The officials were “very receptive to the idea that the Presbyterian church could include a very clear statement of what we understood marriage to be” as part of the marriage ceremony, he said.

The meeting with officials “gave us considerable reassurance”, he said.

It was recommended that the general assembly instruct that the short statement be included in every marriage solemnised according to the form of the Presbyterian church in Ireland and approved by the Republic’s chief registrar, he said.

Rev Watts also said that, as the Presbyterian church in Ireland is an all-island institution, the additional wording would be part of marriage ceremonies in Northern Ireland, even if there were no proposals before the Assembly to make same-sex marriages legal within the jurisdiction.