Pope opens synod, warns Church against judgment of others

Pontiff says Church has to show love and understanding towards all 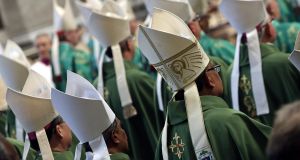 Prelates during the opening Mass of the XVI Ordinary Meeting of the Synod of Bishops. Photograph: EPA 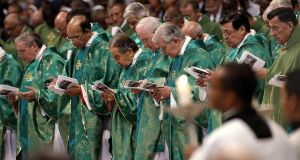 Prelates during the opening Mass of the XVI Ordinary Meeting of the Synod of Bishops, celebrated by Pope Francis, in the Saint Peter’s Basilica. Photograph: EPA

Pope Francis has once again warned the Church against judgment of other people, urging it to “seek out and care for hurting couples with the balm of acceptance and mercy”.

He was speaking as the Synod of Bishops got underway in Rome .

At a Mass attended by Synod participants in St Peter’s Basilica on Sunday morning, he said the Church should not point a finger in judgment of others but rather should be conscious of “her duty to seek out and care for hurting couples with the balm of acceptance and mercy” and to be a ‘field hospital’ with the doors wide open to whoever knocks in search of help and support.

It should “reach out to others with true love, to walk with our fellow men and women who suffer, to include them and guide them to the wellspring of salvation,” he said.

It should be “a Church which teaches and defends fundamental values, while not forgetting that the Sabbath was made for man, not man for the Sabbath”.

The pope’s comments came a day after the Vatican dismissed a Polish monsignor from his Holy See job after he came out as gay and called for changes in Catholic teachings against homosexual activity.

In its explanation of the firing of the monsignor on Saturday, the Vatican said his very public coming out was intended to put undue media pressure on the synod on gay issues, which are expected to be only a small part of the bishops’ discussions.

The story made the front page of nearly all Italian newspapers, with one headline calling it “an Earthquake in the Vatican”.

In his address to the Synod, the pope recalled that Jesus also said: “those who are well have no need of a physician, but those who are sick; I came not to call the righteous, but sinners.” The Church should be “a good Samaritan to wounded humanity,” he added.

He quoted the words of St John Paul II that “error and evil must always be condemned and opposed; but the man who falls or who errs must be understood and loved… we must love our time and help the man of our time.”

“The Church must search out those persons and accompany them, for a Church with closed doors betrays herself and her mission, and, instead of being a bridge, becomes a roadblock.”

He concluded: “In this spirit we ask the Lord to accompany us during the Synod and to guide his Church.”

Among the 270 cardinals, archbishops and bishops taking part, 54 are from Africa, 64 from America, 36 from Asia, 107 from Europe and nine from Oceania.

Invitees from different cultures and nations will take also part. Representatives of other Churches and ecclesial communities will attend as observers.

At its conclusion, the Synod’s final report will be presented to Pope Francis with whom all decisions arising rests. He may then issue an Apostolic Exhortation based on the report, which he can also ignore, but this is thought unlikely.

Girl left scarred after falling into brambles at school awarded €90,000