Marie Kane: ‘There’s a lot of hope in this house at the moment’ 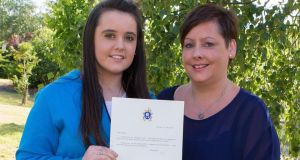 Nicole Kane with her Mum Marie and the letter she received from the Pope. Photograph: Thomas Nolan

Not many Irish teenagers can claim to have received a personal letter from Pope Francis. But Co Carlow’s Nicole Kane (14) can. The letter is short and to the point. Dated July 15th, with the papal coat of arms at the top and the “Vatican” as address, it begins : “Dear Nicole . . .”

It continues: “Thank you for writing to me. I am grateful that you wanted to share your thoughts with me and I will not forget what you said. Thank you too for being such a support to your Mother. I am remembering you both in my prayers. Sincerely, Francis.”

Nicole’s mother, Marie Kane, met Pope Francis in Rome on July 7th last. She told him about the abuse she suffered until the age of 18, and the effect its subsequent handling by the church had on her, on her husband Seán and on their children, Adam (18) and Nicole.

“They have no belief in the church in any shape or form,” she said.

She handed the pope a letter from Nicole and one from herself. In her letter Nicole said she was very disappointed in the church and didn’t have any beliefs anymore because of her mother’s abuse. She hoped the pope would bring about change and make the church a safer place for children.

Marie said Nicole was “so happy” to receive the letter. She too received a letter from the pope. “There’s a lot of hope in this house at the moment, that he is going to change things,” she said.