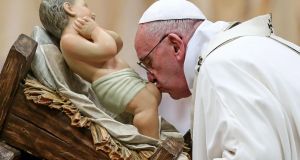 Pope Francis addressed the world’s 1.2 billion Roman Catholics in his homily on Christmas Eve, urging those “intoxicated” by possessions and superficial appearances to return to the essential values of life.

Celebrating a Mass in St Peter’s Basilica, the pope, whose almost three-year-old papacy has been marked by calls for sobriety and compassion for the less fortunate, said Christmas was the time to “once more discover who we are”.

He said everyone should allow the simplicity of the child Jesus, born into poverty in a manger despite his divinity, to infuse their spirit and inspire their lives.

“In a society so often intoxicated by consumerism and hedonism, wealth and extravagance, appearances and narcissism, this Child calls us to act soberly, in other words, in a way that is simple, balanced, consistent, capable of seeing and doing what is essential,” he said in his homily.

The service for about 10,000 people in St Peter’s Basilica started with a long chant in Latin, known as the Kalenda, the traditional proclamation of the birth of Jesus.

The pontiff will deliver the traditional Urbi et Orbi (to the city and the world) message from the central balcony of St Peter’s Square later today.

During midnight Mass at Saint Patrick’s Cathedral in Armagh, Archbishop Eamon Martin touched on the issues of homelessness and the plight of refugees, in his Christmas message.

Dr Martin said Catholics should “respond to God’s mercy” in the coming year “and turn to Jesus in prayer”.

“We can make this a “Mercy Christmas” by helping others through ‘works of mercy’,” he said.

“The corporal works of mercy consist especially in feeding the hungry, sheltering the homeless, clothing the naked, visiting the sick and imprisoned and burying the dead,” Dr Martin said during Midnight Mass.

“As individuals and as society a “Mercy Christmas” challenges us to ask whether we have done enough to make peace, to help relieve poverty, hunger, homelessness and the plight of refugees,” he told the congregation.

Security was tighter than usual in the Vatican area, with police carrying out spot checks. All who entered the basilica, the largest church in Christendom, had to pass through metal detectors.

Following the pontiff’s delivery of his message in Rome, the great bells of St Peter’s rang out and the pope, dressed in white vestments, kissed a statue of the infant Jesus before starting the solemn Mass.

The 79-year-old Argentine pope encapsulated in his homily some of the key themes of his papacy: mercy, compassion, empathy and justice.

“In a world which all too often is merciless to the sinner and lenient to the sin, we need to cultivate a strong sense of justice, to discern and to do God’s will,” he said.

Pope Francis, who said earlier this week he had a slight flu, seemed tired and spoke with a slightly hoarse voice at times.

While not changing fundamental Church doctrine, Francis has been calling for a more merciful and less judgmental Church, one that is more compassionate towards groups such as homosexuals and the divorced who have civilly remarried.

Conservatives have criticised some of his statements, such as the now-famous “Who am I to judge” comment about homosexuals who were seeking God and had good will. The conservatives say statements like these only sow confusion among the faithful.

The pope said child Jesus was calling on everyone to rethink the way they treat others.

“Amid a culture of indifference which not infrequently turns ruthless, our style of life should instead be devout, filled with empathy, compassion and mercy, drawn daily from the wellspring of prayer,” he said.