Only 15% of Church of Ireland members attend services 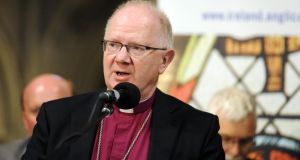 Primate Archbishop Richard Clarke: “Although there were few shocks in what we learnt, it was by any standards a necessary reality check.” Photograph: The Irish Times

Average attendance at Church of Ireland services throughout the island on three Sundays in November 2013 was 58,000, representing 15 per cent of church members, according to a new survey.

Deeper analysis revealed only 13 per cent of the worshippers were young people aged between 12 and 30.

It was the first such survey on weekly attendance undertaken by the Church of Ireland. Addressing the findings in his presidential address to the Church’s General Synod in Armagh on Thursday, Primate Archbishop Richard Clarke commented: “Although there were few shocks in what we learnt, it was by any standards a necessary reality check.”

The figures presented “the scale of the missional challenge ahead of us as a Church, but nevertheless it is one that if we cannot embrace with confidence and with hope in Jesus Christ, we may as well close the doors of our churches now. We must relate to reality, and we must also relate to the future ahead of us, a future towards which God is always calling us.”

It was why at last year’s General Synod he had urged the Church “to look towards the future, to adopt the mind-set of a Long-Term Church, rather than to live metaphorically from hand to mouth with no vision beyond the immediate exigencies of the present moment.”

He added: “In four years’ time, 2019, the Church of Ireland will be marking, and, I hope, celebrating 150 years since its disestablishment in the summer of 1869. One of my deepest hopes is that we may also undertake two major projects that will have reached fruition by then, or at least be in the final stages of completion by that point.”

One would involve drawing up a new constitution for the Church, as the current one was “to say the least, abstruse.”

The second was the setting up of a commission made up of people from without the Church. They would “carry out what we would in other contexts call an ‘inspection’, and let us know what we are doing right, but also what we have to learn about ourselves, and what we could and should be doing better as a Church,” he said.

He said next year marked the centenary of two iconic events which would be widely commemorated. These were the Easter Rising “which in many respects marks the real beginnings of the present-day Irish Republic,” and Battle of the Somme “in which so many Irish men, from all parts of the island and of different religious traditions, fought and died together”

It was “of great importance that these 2016 commemorations are neither one-dimensional nor intentionally polarising,” he said.

Speaking to the media later he said “we should rejoice in the ambiguities rather than the stereotypes,” and cited Tom Kettle and Francis Ledwidge as examples of two people who lost friends to the Rising while they themselves were killed in Flanders.

Archbishop of Dublin Michael Jackson spoke of the way people had embraced the legacy of 1914 with medals and other memorabilia emerging from the back of drawers and which had allowed them evolve a sense of respect and control around commemoration.

He also referred to the Mass in Ringsend, Dublin this week at which 40 children who RTÉ broadcaster Joe Duffy had established as having been killed during the 1916 Rising were remembered, and which he had attended.