Former president of Ireland, Mary McAleese speaks to Mary Minihan about her catholic son bullied for being gay and the negative mail she recieved during the Same-sex Marriage Referendum campaign. 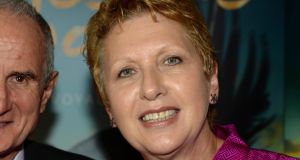 In an interview with The Irish Catholic newspaper this week, Mary McAleese said while she has often considered leaving the Catholic Church in favour of another denomination, she would not change. File photograph: Frank Miller/The Irish Times

Former president Mary McAleese said she has often considered leaving the Catholic Church in favour of another denomination.

In an interview with The Irish Catholic newspaper this week, Ms McAleese said while she has often considered leaving the Catholic Church in favour of another denomination, she would not change.

When asked whether she would consider another denomination, she said: “I had never found anything to attract me because the Catholic Church is woven into me and I relate to it, and for all its messiness it calls me home,” she said.

Ms McAleese said she favours the ordination of women priests, even though such a stance went against the teaching of the church.

She said she “is obliged to accept the infallible teaching of the church”, but did not accept that church teaching on exclusion of women from the priesthood is infallible doctrine.

She said her Catholic faith remains strong, despite her public opposition to the church during the recent referendum on same-sex marriage.

She said her son Justin, who is gay, had given her “an even greater insight” into the prejudices confronting gay people.

Ms McAleese said she is “ashamed” of the Catholic Church’s teaching on gay rights.

“The church wouldn’t necessarily have to be a champion of gay marriage. I’m quite happy for the church to stay away from civil marriage and let the State provide for that – that is not the issue.

“I see my church as a major conduit for homophobia, which is toxic - a form of hatred that has nothing to do with Christ and is un-Christian.”

She said she would “like to see the church take responsibility for the extent to which its words and its language conduces to homophobia”, citing such terms as “evil” in relation to homosexual acts, and “disordered”.

These are not “ancient” words, she said, but were written by Pope Benedict himself.