Major disconnect between Irish students and Catholic Church, a random poll has found 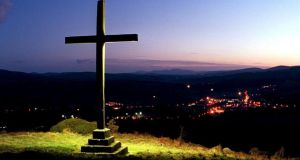 A new poll has found that just 37.5 per cent of students who responded “state that they believe in God”, while 66 per cent “don’t believe that religion makes the world a better place”. Asked whether abortion should be allowed in Ireland, 83.5 per cent responded that it should.

The survey was conducted among 1,146 students, chosen at random from more than 30 third-level institutions over the past two weeks.

It found that while fewer than 60 per cent of respondents considered themselves Catholic, the second largest group was atheists at 20 per cent.

The Student Marketing Network, which carried out the survey, concluded that this “highlights the differing attitudes of the student population from the country as a whole”, noting that in the 2011 census, “84.16 per cent . . . said they were Catholic”, while of the student sample “only 57.8 per cent would claim to be Catholic”.

Religious services
Asked whether they attended communal religious ceremonies and functions, 61 per cent of the students said No, while those who said Yes attended just one to three times a year.

It also found that while 61.5 per cent of Catholic students took Communion, just 32.2 per cent of them believed it to be the body and blood of Christ. Of those students who did follow a religion, 45.2 per cent did so because of their parents’ influence.

However, 40 per cent of respondents didn’t want their children to follow the same religion they were brought up with. Only 13.7 per cent followed a religion due to a strong faith.

The students regard “looking good” (fifth) as more important than “religious beliefs” (sixth), with friends and family topping their list of importance.