Groups thank ‘all parties in the education sector, from primary schools to universities’ 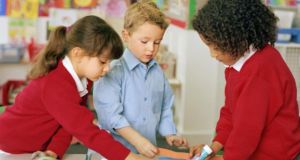 There is no need for upheaval or revolution in the education system in Ireland, according to the country’s two main Muslim representative organisations.

Ireland’s two main representative Muslim organisations have said there is no need for upheaval or revolution in the education system where they are concerned.

Irish schools are “very accommodating” to Muslim students and “Catholic school managements have made wonderful efforts to make their schools as inclusive as possible without losing their own ethos,” they said in a statement.

The Islamic Foundation of Ireland (IFI) and the Islamic Cultural Centre of Ireland (ICCI) also pointed out that “many Muslim children who have passed through Irish primary and secondary schools, through to colleges and universities all over Ireland have now become an integral part of Irish society without losing their cultural or religious identity. The majority would have passed through the predominantly Catholic schools throughout the country without any issues.”

They expressedtheir thanks “to all parties in the education sector, from primary schools up to the universities, and look forward to continued cooperation and mutual respect of their colleagues in the wider education forum.”

The IFI and ICCI were responding to criticisms of the Irish education system when it came to accommodating the beliefs and practices of Muslim students expressed by Dr Ali Selim in his new book Islam and Education in Ireland and reported in this newspaper last week.

Dr Selim, also of the Islamic Cultural Centre, and a lecturer in Trinity College and the Mater Dei Institute in Dublin, called for “a revolution of inclusivity” in Irish schools and “an upheaval in Irish educational perspectives” to accommodate the needs of a society which is now “home to a variety of Christian denominations, as well as people of other faiths and of none”.

He noted that “Muslim festivals are neither celebrated or marked in the calendar in Irish schools”. He called for separate same-sex PE facilities for Muslim girls and criticised RSE programmes in schools, as well as music and drama classes, where there could be “a clash of values” with Islam.

In their statement the IFI and ICCI who, as they put it, represented “ the official body for Islamic education in Ireland as recognised by the Department of Education”, said Dr Selim’s views were not theirs.

The IFI, “as the longest established Islamic body in Ireland (since 1959), and as patron of the Muslim national schools in Ireland since 1990”, could “confidently assert that such opinions are neither shared by the IFI, the ICCI nor the majority of participating members in the Islamic community here”.

The reality was that “whenever cultural/religious problems have been encountered in schools, these have always been resolved between the school’s principal/board of management and the parents to the satisfaction of all parties. The IFI, as patron, has enjoyed cordial cooperation and liaisons with other management bodies such as Educate Together, and the CPMSA (Catholic Primary School Management Association) to whom we are affiliated.”

They did, however, agree with Dr Selim on admission to Irish schools. “We acknowledge that there is always pressure on schools and on parents of all denominations and no faith seeking places which sometimes results with many parents not receiving their first choice.Pressure for secondary school places is always a problem in large urban areas.”

They continued however that,“even at third level education there has been good relations and cooperation amongst various third level establishments including Froebel College and St Patrick’s College who have both encouraged Muslim children to apply for primary school teaching.

“We would further like to point out that the examples given in the article (newspaper report of Dr Selim’s concerns) are only indicative of a minority of cases, which invariably can occur with any minority communities adapting into the mainstream.”

They concluded: “we therefore see no need for neither an ‘Upheaval’ nor a ‘Revolution’ in the Irish education system, but we advocate for further co-operation between ourselves, the Department of Education and all schools concerned.”