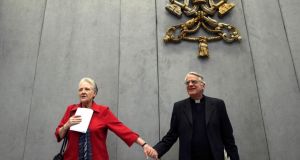 Marie Collins, member of the Pontifical Commission for the Protection of Minors, and Vatican spokesman Fr Federico Lombardi, leave at the end of the first briefing at the Holy See press office at the Vatican last month. Photograph: Alessandro Bianchi/Reuters

Sources in Rome have confirmed that Pope Francis will meet clerical sex abuse victims, including Irish victims, in the Vatican sometime next week. On the papal flight back to Rome following his recent pilgrimage to the Holy Land, Francis told reporters that he would be meeting a group of victims, probably sometime in early July.

Vatican practice where such meetings are concerned usually entails no advance warning, with news of the encounter relayed to the media only after the victims have met the pontiff. In theory, this is to avoid any form of media concentration on what for many victims is a difficult and tortured “spiritual” moment.

However, given that Francis himself released the news on the papal flight, the only blanks to be filled in concern the names and origins of the victims. Vatican sources suggest they will come from Ireland, the US, Britain and Poland.

It is expected that the meeting will take place in the Domus Santa Marta, the Vatican bed and breakfast that Pope Francis uses as his residence in preference to the Apostolic Palace.

Vatican spokesman Fr Federico Lombardi yesterday said he could not confirm speculation about next week’s encounter nor could he offer any details about what might happen at the meeting.

It seems likely that the pope will listen at length to the victims’ stories before praying with them and imparting his apostolic blessing.

The US clerical sex abuse victims lobby Snap said: “In each of those four countries, hundreds or even thousands of victims are bravely speaking up and protecting children by exposing clerics who commit and conceal heinous clergy sex crimes.

“There’s a lesson here for victims across the world. Despite deep pain and long odds, by overcoming your fears and uniting with other victims you can attract attention and sometimes prod Catholic officials to do something.

“More importantly, by stepping forward, you can reduce your shame, get some help and begin – no matter what the church hierarchy does or doesn’t do – to really protect the vulnerable and heal the wounded.”

Marie Collins is believed to have been the first known abuse victim to meet Pope Francis and certainly was the first Irish person to do so when they met briefly in Rome last month. She was there to attend the first meeting of the Vatican’s new Commission for the Protection of Minors. Ms Collins is one of four women on the commission, which meets again early next month.

Last night she said she was “hopeful” and “quite positive” about the commission. While acknowledging matters were at an early stage, she said: “From what I’ve seen, I think it’s going in the right direction. I do think the people involved are sincere.” She was “more positive after the first meeting than I was beforehand”.

At this stage the primary task of the four men and four women, who make up the commission, is to draw up the statutes defining its role.