Father of former president Mary McAleese to be buried tomorrow 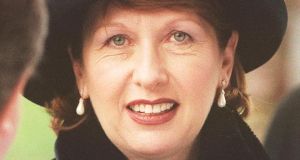 The funeral Mass for Paddy (Patrick) Leneghan (88), father of former president Mary McAleese, takes place at St Mary’s Star of the Sea Church in Rostrevor, Co Down, at 11am on Monday.

He will be buried at Kilbroney municipal cemetery in Rostrevor. He had been ill for some time.

From Croghan in Co Roscommon, he left school at 14 and went to Belfast in 1939, eventually taking over the Long Bar pub at Leeson Street on the Falls Road in 1958. He married one of his aunt’s employees, Claire McManus, in June 1950. Their eldest child, Mary, was born in 1951. She was followed by Norah, Damien, John, Catherine (Kate), Patrick, Claire, Phelim and Clement.

In October 1972 a 23-year-old woman was killed in a car bomb outside the Long Bar. Paddy Leneghan ran to help her but she died as he held her. He was traumatised by the experience.

On December 8th, 1972, gunmen sprayed their home with more than 30 bullets, while parents and children were, as it happened, staying with relatives. Bullets lodged in walls, furniture and mattresses.

The family left and the children stayed with relatives until their parents found a suitable house in Andersonstown. A few years later they moved to Rostrevor.