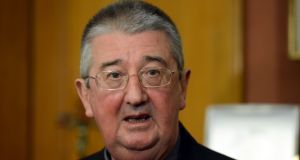 Archbishop of Dublin Diarmuid Martin said an overnight change of doctrine is you say that what was wrong is now right, that is “just not on the cards”. Photograph: Cyril Byrne/The Irish Times

Archbishop of Dublin Diarmuid Martin has warned against expectations of doctrinal change at the end of the three year long Synod process.

Speaking in Rome today, Archbishop Martin said this Synod on the family been very “different” but it would be misleading to suggest that it will lead to immediate change in relation to “celebrity” issues such as homosexuality and communion for the divorced, explaining:

“There can be a development of doctrine in the sense that we can understand the same doctrine in a different way, but a change whereby, overnight, you say that what was wrong is now right, that is just not on the cards.”

Dr Martin said this Synod has been radically different because, thanks to Pope Francis, it has been marked by a genuine dialogue and an at times heated debate.

However, he said the Pope has so far “given no indication as to where he stands on anything” for the reason that this is a three year long process that will be concluded only when the Pope himself issues his post-Synodal apostolic exhortation, after the second leg of this Family Synod in October next year:

Dr Martin said the Synod’s final message today may seem less dramatic than the “welcoming” remarks on homosexuality earlier this week. The final document underlines that there can be no discrimination against gays but it reaffirms Catholic Church opposition to gay marriage.

On the ban on divorced people receiving the sacrament of communion, Dr Martin it was one of those “unanswered questions”, adding:

“There are unanswered questions about what sort of recognition you give to second marriages, to people living together all their lives...There is a very clear recognition that young people are living together, for shorter or longer periods, that people live in short term relationships, experience failed marriages and there are the divorced and the remarried...

“How do we talk to these people, how do we tell them to reflect, that committing themselves to one another is an important value...how should the Church talk to young people...

“Irish Catholics come from a very rigid system which is either black or white, rigourism and laxism, we are not good at dealing with the ‘grey’ areas, we don’t know how to live in the grey area...”

Despite the obvious (and public) differences of opinion that have accompanied this Synod, Dr Martin said it has been marked by a genuine spirit of fraternal collegiality. There has been “no shouting”, adding though:

“But that doesn’t mean that Cardinal Burke spends all his coffee break talking to Cardinal Kaspar. People have been speaking strongly but not in a polemical way...”

Dr. Martin also said that, unlike the Second Vatican Council, where there was a very obvious divide between the Roman Curia and the local churches, this Synod has been much more “globalised” with Bishops from all around the world and from the Curia admitting that they often face exactly the same problems in their ministries, adding:

“There is no strong Curia figure who, just by the virtue of their office can tell everyone to shut up...This is a long process, a long discussion intended to help the Church radically renew its pastoral care of the family...”