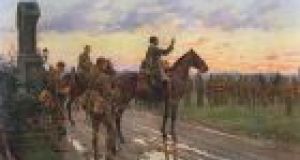 The diaries of a priest who was chaplain in the first World War are to go on public display for the first time on Friday as part of the Catholic Archdiocese of Dublin’s exhibition to mark Culture Night.

They can be seen at Holy Cross College, Clonliffe Road in Dublin from 6pm . Admission is free.

Fr Francis Gleeson was chaplain to the Royal Munster Fusiliers as they faced battle on the Western Front and is depicted in the well-known painting The Last General Absolution of the Munsters at Rue du Bois by Fortunino Matania. He is seen mounted on a horse, giving absolution to the troops on the eve of the Battle of Aubers Ridge in May 1915.

It frequently came down to him to inform families of deaths of loved ones during the war and some examples of this correspondence will be on show next Friday.

Also on display will be archival material on World War I , including documents on the ‘Tobacco Fund Appeal’ started by the Weekly Dispatch in 1914 and subscribed to by over 250,000 households. The appeal was launched to ensure that one parcel per week of smoking material was sent to every man on the front lines who “love their weed as they do their country.”

Paintings on display will include works by William Orpen, the previously mentioned portrait of Fr Gleeson and a painting of Irish troops under bombardment in Palestine. Actor Margaret Ó Dálaigh will give a live performance of World War I poetry, followed by a concert of popular songs from the war and a recital of sacred music led by the Dublin Diocesan Music Group.

Meanwhile at the Pro Cathedral on the same evening, a Vespers with the Boys of the Palestrina Choir will take place at 5pm, followed by a sung Mass. There will be an organ recital by Robbie Carroll and music from the the Pro-Cathedral Girls’ Choir. Later there will be contemporary sacred music from Sharon Lyons and friends with a selections from Pergolesi, Stabat Mater (boys’ voices).

The evening concludes at 10pm with Compline, again with boys’ voices.