A ‘clamping down and closing in on freedom of speech’, says second Presbyterian minister 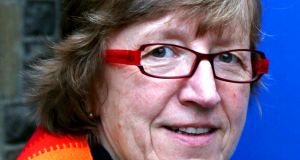 The Presbyterian Church in Ireland has welcomed confirmation that Armagh Minister Rev Christina Bradley is in agreement with its position on marriage.

Last May, Rev Bradley, who ministers in Portadown, Co Armagh, welcomed the same sex referendum result in the Republic as “inclusive and compassionate”.

It prompted an investigation by the church locally and the findings were read in her presence at Armagh Road church in Portadown last Sunday.

They stated that she fully accepted church teaching “that marriage is to be between one man and one woman”, and had confirmed same-sex marriage was contrary to the will of God and that homosexual practice was sinful.

She also accepted her welcoming of the same-sex referendum result was “open to misinterpretation” and said she “had no intention of bringing the Church into disrepute”.

He pointed out that in the Church “Ministers and Elders, are answerable to their Presbytery for matters of life and doctrine”.

When issues arose, “we always seek to understand what has been said, or done, in a genuine attempt to gain perspective on a particular matter – be it same sex relationships or any other issue. Within the parameters of what we hold scripture teaches us on any given subject, and the outworking of the prayerful deliberations and free discussion at our General Assembly each year, the Church comes to its decisions on matters of life and doctrine.

“Our position on marriage is that it is between one man and one woman, which is not at variance with historic mainstream and orthodox Christian teaching. We recognise that from this biblical position there arise sensitive pastoral issues for us, as we continue to affirm that all people are valued and cherished by God,” he said.

However, another Presbyterian minister Rev David Latimer has described the treatment of Rev Bradley as totalitarian. Minister at First Derry Presbyterian, he asked “are we on the verge of totalitarianism where everyone is expected to toe the line . . . I don’t think from my reading of scripture and my everyday living as a Christian Minister that the church should be seeking to crush or silence those that might be seeing things differently.”

Speaking on the BBC Northern Ireland Talkback programme, he said “I just love the historic record we have as Presbyterians of dissenting, of speaking out and I want to speak out in defence of Christina Bradley”.

He said that “in using that word ‘totalitarian’, I’m looking at states who would have exercised that clamping down and closing in on freedom of speech and the right to express onself that’s foreign to Presbyterianism, which prides itself on being democratic if not the democratic church among all churches”.