Catholic library board members resign in row over DCU takeover

Central Catholic Library is in financial difficulty as usage declines 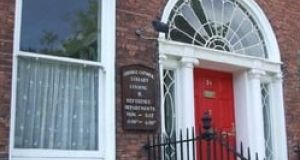 The Central Catholic Library was founded in 1922 and has more than 70,000 books.

Six board members of the loss-making Central Catholic Library in Dublin have resigned in protest over a decision to reject a take-over proposal from Dublin City University (DCU).

Located at Merrion Square, the library has been in financial difficulty for some time. In 2015 it had an operating loss of €11,240, while in 2014 losses were €12,461, subsequently reduced by a bequest.

Among the those who resigned from the 18-person board were Jesuit priest Fr Brendan Comerford, Frank Litton, Felix Larkin, Peter Costello, Michael Sheehy, and Tony White.

The voluntary subscription library was founded in 1922 by Jesuit priest Fr Stephen Brown to assist the Catholic laity inform themselves.

It is said to contain more than 70,000 books, some dating from the 16th century. It has experienced a significant drop in membership and usage over recent years.

The remaining board members are expected to meet next week to discuss the future of the library.

In their letter of resignation, dated October 24th, the six departing board members said they “could not in conscience continue to serve as directors of the library”.

In turning down the DCU offer the board had “walked away from a proposal that would have preserved the Library’s collection in perpetuity and strengthened Catholic studies. There is no other proposal on the table that will achieve this,” they said.

The board members who resigned said they believed “the search for other solutions had scant chance of success.”

Observing that at DCU, “perhaps some of its faculty and courses are hostile to the Church and its teachings” they point out that “a University, however, has many parts and one part of DCU is committed, with the full support of our Archbishop [Diarmuid Martin] to Catholic studies.

“How could following his example by placing the library’s collection in its care be construed as a betrayal of the vision of its founder Fr Browne, of as selling-out to ‘secularism’?”

The library’s financial position was “of serious concern” while the building was in need of “serious capital investment” and “proper salary and pension provisions needed to be made” for the sole staff member.

As directors they were required by company law to act in the best interests of the library, they said, and had “onerous responsibilities under charities legislation.”

Taking all matters into consideration they believed the board’s decision to reject the DCU offer “and to reject it permanently– is contrary to the best interests of the library.”

These board members felt remaining on the board was “incompatible with our obligations in law – apart altogether from our belief that the decision of the board is utterly misguided.” It was why “we have felt it necessary to resign”.

David McEllin, who is the library company secretary and one of the remaining 12 members of the board, told The Irish Times the six who had resigned had not been replaced said the future of the library was to be discussed at a board meeting next week.