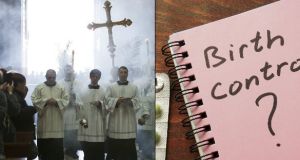 In their “Affirmation” academics defending church teaching say they “hold that the church’s teaching on contraception is true and defensible on the basis of scripture and reason”. Photographs: Getty Images

Two documents were published by Catholic Church scholars on Tuesday advocating rival stances on the church’s teaching on artificial means of contraception.

Former president Mary McAleese was among more than 100 international Catholic academics who have signed a Scholars’ Statement challenging the church’s ban. The statement was published at an event hosted by the UN Population Fund in New York.

Meanwhile a statement in Affirmation of the Catholic Church’s Teaching on the Gift of Sexuality, was published at the Catholic University of America in Washington DC also.

Other Irish-based signatories include Dr Mary McCaughey of the Priory Institute, Dublin, Geraldine McSweeney, Dublin-based President of the International Catholic Committee of Nurses and Medico-Social Assistants and Dr William A Thomas, professor of Theology/Mariology at Newman College Ireland.

The Scholars’s Statement says that the church ban on contraceptives for family planning “is based on the belief that the biological “laws of conception” show that each and every act of sexual intercourse has procreation as their natural “finality” and “significance”. But “the vast majority of acts of sexual intercourse do not have the biological ‘capacity’ for procreation, and therefore they cannot have procreation as their ‘finality’ or ‘significance’,” it says.

In their “Affirmation” academics defending church teaching say they “hold that the church’s teaching on contraception is true and defensible on the basis of scripture and reason”.

Fr Twomey said arguments presented by the Scholars’ Statement had “long since been dealt with by serious theology”. Over the past 40 years there had been “major developments in the area of natural family planning as a means of birth control and the means to achieve it,” he said.