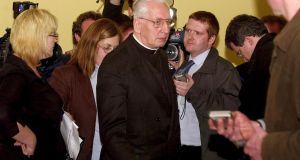 One of the most fraught confrontations between senior Catholic Church figures and the Irish media took place on April 8th, 2002. It was at a press conference in Maynooth following the BBC programme Suing the Pope, which looked at how the Ferns diocese had dealt with allegations of clerical child sexual abuse. After the programme Bishop of Ferns Brendan Comiskey resigned.

The bishops had met for an “extraordinary general meeting” and a planned press conference was delayed 90 minutes because of protesting abuse victims. It was feared they might take over the press conference which was then moved deeper within St Patrick’s College.

However, the room chosen meant hosting bishops had no way out except back through an angry media. It would not happen again.

The mood was taut.

The press conference began at 6pm and was being broadcast live on the RTÉ One television news. It began badly with Brady fudging a question on whether the church would hand over all files to the independent audit they had just announced of all dioceses in Ireland on the incidence of clerical child sexual abuse.

Three times he was asked by this reporter and three times he would not say whether all files would be handed over. There was pandemonium. A colleague from another newspaper shouted at the Archbishop in frustration and demanded that he answer the question directly. He didn’t.

Then it was Connell’s turn. Tackled repeatedly on failures in handling the abuse issue he protested: “I am as human as any of you.” It was “slanderous” to suggest his interest in the matter was recent when “it is the issue which has devastated my period of office,” he said.

Later, as he wended his way out through an incensed media, he began: “You people,” before correcting himself. “I’m very sorry, I shouldn’t say: ‘You people.’ But you come along and treat us as if we were utterly indifferent to what was going on. And I have gone through agonies over this thing.”

This was before the Ferns report (published in October 2005), the Ryan report (the May 2009 report into abuses in residential institutions for children), the Murphy report – into the Dublin archdiocese (November 2009), the Cloyne report (July 2011) and the interdepartmental report into the Magdalene laundries (February 2013).

Accompanying it all was a mutual suspicion: that the church was hiding the truth and that the media had but one agenda – to destroy the church in Ireland.

An example of the latter followed another fraught press conference. This one took place at Rome’s Vatican Radio centre in February 2010 after the Irish bishops had been summoned to meet Pope Benedict to account for themselves following publication of the Ferns, Ryan, and Murphy reports. (The Cloyne and Magdalene laundries reports were to come.)

Other media colleagues would have had similar experiences down the years.

Few such offices anywhere have had to work in as difficult an environment as the Catholic Communications Office in Ireland, added to which it has 26 masters, the bishops of the 26 Catholic dioceses on the island.

Inevitably, in the circumstances relations between it and media have become very strained at times in recent decades, sometimes to breaking point. This situation continues.

This is particularly so where reporters are concerned. Less the case with photographers or camera personnel, as they don’t ask questions.

The office was set up in 1975 at the instigation of then bishop of Derry Edward Daly, spokesman for the Catholic bishops from 1975 to 1980. Based in Booterstown, its first director was the late Jim Cantwell, with Fr Tom Stack as deputy, who was succeeded in that role by Des Cryan.

Cantwell held the position for 25 years before retiring in 2000, by which time most of the office and its personnel had moved to Maynooth. Martin Long, current director, was appointed to succeed him, assisted by Brenda Drumm.

It proved a huge strain, with one person saying the job should have carried a health warning.

As Cantwell had said: “The job of spokesman for the episcopal conference, for a bishop, should come with a health warning, given the demands of a bishop’s role today.”

In a break with precedent it was decided to appoint a priest as full-time spokesman for the bishops and that was Dublin priest Fr Martin Clarke. He was in the role from 1997 to 2003, when he served for a brief period at the communications office for the Dublin archdiocese.

These appointments were described by his friend Fr Dermod McCarthy, former head of religious programmes at RTÉ, as “a poisoned chalice”. Fr Clarke died in 2013 aged 66 after periods as parish priest in Monkstown and Donnybrook.

To mark the setting up of the Catholic Communications Office 40 years ago there will be a special Mass in Maynooth today, followed by an address from the Catholic primate Archbishop Eamon Martin and a talk by Msgr Paul Tighe, secretary of the Vatican’s council for social communications.