Archbishop accused of releasing ‘tsunami of invective’ on church 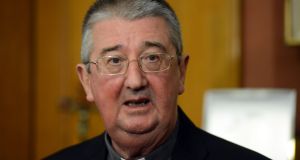 Archbishop of Dublin Diarmuid Martin has been criticised for his comments about the seminary in Maynooth. File photograph: Cyril Byrne/The Irish Times

The Catholic Archbishop of Dublin Diarmuid Martin has been accused of unleashing a “tsunami of invective and gleeful nods-and-winks” which have embarrassed the church through his recent comments about “goings on” at the national seminary in Maynooth.

Columban priest Fr Seán McDonagh, of the Association of Catholic Priests (ACP) leadership team, said “one wonders did Dr Martin realise that August is the silly season for the media, and that his announcement would lead to a deluge of coverage in the Irish media about the suitability of Maynooth as a training centre for seminarians.

“The tsunami of invective and gleeful nods-and-winks that have resulted from his announcement was an embarrassment for the Irish Catholic Church. ”

Fr McDonagh recalled how ACP colleague Fr Brendan Hoban had warned that the Archbishop’s decision to send three Dublin seminarians to the Irish College in Rome rather than Maynooth “will have far-reaching consequences, not just for Maynooth but for the Irish Catholic Church. He [Fr Hoban] also stated that Archbishop Martin’s arguments about moving students to Rome ‘are not convincing’.”

Fr Hoban, he said, “went on to make it clear that that many participants in the media scrum triggered by Archbishop Martin’s comments have a particular vision of the kind of church that they want to see promoted in Ireland today.”

Fr McDonagh also noted how “the ACP has been pointing out for the past five years that priestly ministry is collapsing in Ireland. There are 1.2 million Catholics in the Archdiocese of Dublin, yet Archbishop Martin is talking about transferring a mere three seminarians to Rome.

“We need a completely new structure of ministry in the Catholic Church in Ireland if we wish to have the Eucharist available to us in the future and have competent pastoral care for everyone.”

He concluded by expressing amazement that “during all of the controversy which ensued during the week, nobody mentioned three of the most significant documents of the modern church – The Joy of the Gospel, Laudato Si’ : On Care For Our Common Home and The Joy of Love. These are pivotal documents in the modern church and yet, they were missing for the debate.”

He looked forward to the day “when the media – if they are genuinely interested in the future of the Irish church – will afford the same time, interest and energy to discussing the latter as they have to this week’s Maynooth story.”

1 Archaeologists are ‘quite sure’ they have found Red Hugh O’Donnell’s burial place
2 Coronavirus: No new Covid-19 deaths reported in State for first time since March
3 Coronavirus: What will reopen in Ireland’s phases to ease restrictions and what are the dates?
4 WHO warns of potential for ‘immediate second peak’ in Covid-19
5 Tributes paid to Ireland’s deputy ambassador to China who died on Sunday
Real news has value SUBSCRIBE