Ancestor of Princess Diana and Churchill on path to sainthood 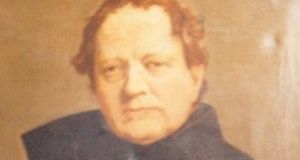 A 19th century English Catholic priest, ancestor of Princess Diana, Princes William and Harry, as well as Winston Churchill, has been moved another step closer to canonisation by the Vatican.

It emerged this week that Rome’s Congregation for the Causes of Saints has approved moves to designate Fr Ignatius Spencer ‘Venerable’. Once so approved, and recognised as responsible for a miracle, he will be declared ‘Blessed’. Following a second such miracle he can be canonised.

Youngest son of the 2nd Earl Spencer, he was born in 1799, became an Anglican clergyman in 1824 and concerted to Catholicism in 1830. Two years later he was ordained a Catholic priest in Rome. In 1847 he joined the Passionist congregation and worked among the destitute Irish in the English midlands.

He devoted much of his life to a crusade for the conversion of England to Catholicism in the course of which he visited Ireland four times, beginning in 1842.

By then he was convinced he had an original solution to the eternally troubling Irish question; he believed that if the Irish prayed for the conversion of England then, through prayer, both countries could be united in religion, so reducing antagonism. In 1851 on a second visit to Ireland he made his famous appeal for a ‘Hail Mary’ a day for the conversion of England.

In 1852 he launched a society which undertook “by united prayer to obtain from God the conversion of all the unfortunate people who, under the name of Christian, are separated from the fold of the one Shepherd, not confining ourselves only to Protestants…any more than confining the prayers to England, but including the Greeks and the Russians and the ancient sects of Asia. ”

Such sentiments were welcomed by then Catholic Primate of Ireland Archbishop William Crolly. In response Fr Spencer wrote:“It seems that Ireland is to be the first nation which will rise with one simultaneous impulse to gain from God the restoration of unity to Christendom, after which the Gospel will surely spread throughout the world. For what is there that stops its spread but the division and opposition of Christians.”

Great-great-great uncle of Princess Diana and a great uncle of Winston Churchill, Fr Ignatius grew up in the Spencer family home at Althorp, Northamptonshire, where Lady Diana was buried after she was killed in a Paris car crash in August 1997. He died in October 18 64.