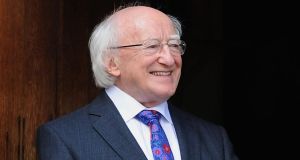 President Michael D Higgins who is visiting Ethiopia, Malawi and South Africa: “These are our fellow children of the planet. We have to decide that we will allow the people to live and to survive at least . . . Feeding children on 80 cents a day and to be short of the 80 cents is a scandal to humanity.” Photograph: Joe Giddens/PA

It might have been a scene from Yeats’s Among School Children, there in the Tierkidi refugee camp in Ethiopia’s Gambella province on the borders with South Sudan. Mary T Murphy, from near Macroom in Co Cork, guided President Michael D Higgins from room to hastily erected room, each full of tall elegant women of the Nuer tribe and their small children. All were seated on the floor waiting for the “smiling public man” as a redoubtable Mary T explained to him how everything in the camp was done in “the best modern way”.

A woman who clearly loves what she does and the people she does it for, she is an example of those extraordinary Irish men and women who choose to be in very trying conditions helping the most helpless.

At a reception hosted by Irish ambassador Aidan O’Hara in Addis Ababa last Wednesday, President Higgins said of them: “To me they represent an ‘Irishness’ to which all of us should aspire, motivated by a deep empathy put into action and a strong ethical character.”

For his own part the President was on home ground, philosophically speaking. He was among the most wretched of this earth. As they sat on ground behind him, he upbraided a world indifferent to their plight. He reminded those who would hear that, with the rainy season over, conflict would resume in South Sudan with the likelihood that thousands more refugees would cross to camps, where only 45 per cent of the needs of people were being met.

“These are our fellow citizens and fellow children of the planet . . . We have to decide that we will allow the people to live and to survive at least . . . Feeding children on 80 cents a day and to be short of the 80 cents is a scandal to humanity.”

He demanded a decision “within weeks” by the international community.

It was the same passion, although articulated through a more complex intellectual journey, which impressed representatives of 54 African nations who heard his keynote address at the UN Economic Commission in its impressive, if ageing, Addis Ababa building last Wednesday.

Chaired by commission executive secretary Dr Carlos Lopes, it would be fair to say that not many there were aware of Ireland’s history as a colonised nation. Ireland to them was simply “Europe”, part of that continent whose history in Africa is less than glorious.

It was probably when President Higgins first referred to ‘Lucy’ that his audience really began to tune in. He recalled the 1974 discovery in Ethiopia of ‘Lucy’, a 1.1 metre high female hominin estimated to have lived 3.2 million years ago. Her discovery, he told them, debunked “the pseudo-science of the 19th century European racial anthropologists and white supremacists”.

It “changed forever scientific understanding of human origins” with the discovery that “the first woman was not a white Eve but an ‘irretrievably black Eve’, to borrow a term.” From there the audience was his to do with as he would. He told them about Ireland and much more, about governance, alternative economic thinking, about shifting identity.

The Irish, President Higgins said, “were never proud proponents of racial supremacy theories” but were frequently victims “from the 17th century onwards . . . with the purpose of justifying the superiority of the coloniser over the colonised”.

Ireland too “experienced the scourges of colonisation and hunger” and “also had to struggle for independence, and endured the subsequent harrowing destabilisation of civil war.” It went down well.

Asked afterwards by The Irish Times whether such an address to representatives of Africa by the President of a small state on the edge of the smallest continent was not akin to a mouse advising an elephant, Dr Lopes politely disagreed.

President Higgins’s speech, he said, was “a very humble way of putting the Irish experience at the disposal of others. Africans appreciate the sense of history that the President brought because that sense of history resonates with Africans.”

President Higgins today begins the first official visit by an Irish head of state to Malawi.