Most Dublin homeless families are from two areas 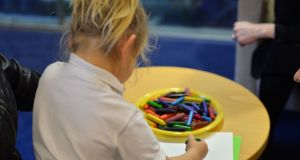 The findings show two-thirds of homeless children in the capital are eight or younger, and they are travelling an average 8.75km from their emergency accommodation to school

Almost 70 per cent of homeless families in Dublin are coming from two areas in the north of the city, with almost 40 per cent from the the constituency represented by Tánaiste Joan Burton and Minister for Health, Leo Varadkar.

The findings are contained in research just published by Focus Ireland, which also shows two-thirds of homeless children in the capital are aged eight or younger, and they are travelling an average of 8.75km from their emergency accommodation to school. One child in the study had a 68km round-trip to go to school.

The “Preliminary Analysis of Children and Families in Emergency Homeless Accommodation” draws on anonymised information provided by 307 families, including 636 children.

The details, including the home address, number and ages of children and parents and school information, are provided at initial assessment interviews with Focus Ireland’s homeless action team. The 307 families studied were all those who, at the start of November 2015, had been referred to Focus Ireland but had not yet been allocated a case worker.

Some 118 families (38 per cent) came from the Blanchardstown/Mulhuddart area in the Dublin West constituency represented by Ms Burton and Mr Varadkar.

Ms Burton has consistently resisted calls to increase rent supplement, a measure campaigners say would help families stay in their homes as rents spiral out of reach of many dependent on the support.

A further 89 families (29 per cent) came from the Ballymun/Finglas area .

“The majority of children stayed enrolled in the school they were attending when they became homeless,” says the report.

Google maps was used to measure distances travelled to get to school for a sample of 63 of the children.

“On average we found that children travelled 8.75km to school.

One child was residing in emergency accommodation which was 34km from their school.

“However, even lesser distances may prove more difficult if suitable public transport links do not exist. For example one child was residing 14.1km from their school.”

Families spoke of having to catch two buses and take journeys of up to 2½ hours each way to attend school.

A majority of the families – 195 or 63 per cent – were headed by single mothers.

Some 2 per cent (four) were headed by single fathers, with 108 (35 per cent) headed by couples. “We found that the vast majority [88.6 per cent] of families had between one and three children.”

The most recent figures from the Dublin Region Homeless Executive show the number of homeless children in the capital peaked in November last year at 1,466 in 705 families, falling in December to 1,409 children in 683 families.

This compares with 780 homeless children in 359 families at the start of last year – up 87 per cent over the year.

Though the numbers for January 2016 have yet to be published, sources say they are “significantly up” on December.