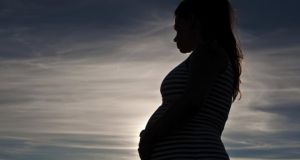 “No more desperate women and girls should have to resort to the courts here and in the EU,” the National Women’s Council of Ireland said. Photograph: Getty

Implementation of new abortion legislation will be “monitored” by the Government, Minister for Justice Frances Fitzgerald has said.

She declined to comment on the case of a young, pregnant foreign national who stated she was suicidal but was refused an abortion by an expert panel. She said, however, the implementation of the Protection of Life During Pregnancy (PLDP) Act, which was commenced in January, would be monitored.

“Well obviously I can’t comment, as you will appreciate, on individual cases,” said the Minister. “Obviously I would be concerned and people reading the accounts will be concerned for the woman and the baby involved. Clearly we passed legislation earlier in the year and will continue to monitor legislation and see how it is being implemented.”

The young woman’s pregnancy was delivered in the last fortnight at 25 weeks’ gestation after a panel of two psychiatrists and one obstetrician agreed she was suicidal.

She had gone on thirst and hunger strike after July 22nd when she was told she could not have an abortion as the pregnancy was too far progressed. The HSE then obtained a High Court order to rehydrate her.

It was agreed that as the foetus was viable it should be delivered by Caesarian section. Though she initially refused this option, she subsequently agreed to it.

Sources familiar with the case say the woman, who does not speak English, had asked statutory authorities for an abortion as soon as she found out she was pregnant – in early April. However, she seems not to have come to the attention of the HSE until mid-July after she approached a GP herself.

The premature baby remains in hospital and will be in State care while the young woman is receiving ongoing psychiatric care outside hospital.

The National Women’s Council of Ireland (NWCI) described her treatment as “horrific and distressing” and said it underlined the need for a referendum to repeal article 40.3.3 of the Constitution.

Article 40.3.3 states that the life of the mother and the unborn child are equal and both must be protected as far as is practicable.

The NWCI said: “No civilised society can stand over a law which sees a woman lose her bodily autonomy once pregnant. No more desperate women and girls should have to resort to the courts here and in the EU. The time for action is now.”

Doctors for Choice said the case raised “urgent questions” including why the woman was denied access to abortion services for so long; whether she was advised of her right to appeal against the decision to deliver by Caesarian section; whether there was a delay in certifying her as suicidal, and on what grounds a High Court order had been given to hydrate and feed her.

The Pro-Life Campaign said the case highlighted “the horror and deep seated flaws” in the legislation.

Dr Ruth Cullen of the campaign said: “To put a defenceless baby through all this, and to pretend the intervention is medically indicated when it is known that there is no evidence to back it up, is a chilling aberration of law and medicine.”

Guidelines on the implementation of the Protection of Life During Pregnancy Act are expected to be signed off on by the Department of Health this week. Though not formally published, they have been widely leaked and appear to have been followed to some degree in this case.

The young woman was assessed by three consultants – two psychiatrists and one obstetrician and they were unanimous in their assessment that the pregnancy needed to be terminated to avert her suicide, possibly by hunger strike.

Whether her case was dealt with urgently, as is required in the Act, and whether she was advised of her right to appeal the decision to deliver the pregnancy by C-section when she had consistently sought an abortion remains unclear.