Treatment has replaced patient’s painkillers but remains unlicensed in Ireland 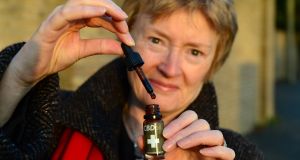 Colette Frawley with a bottle of CBD oil; she says her neurological consultant refulsed to discuss the treatment with her. Photograph: Dara Mac Donaill/The Irish Times

Colette Frawley (61), who has suffered excruciating and debilitating migraines since childhood, recently discovered cannabidiol (CBD) oil, a derivative of cannabis. It has, she says, changed her life.

Having been on “every painkiller in the book” since 10, she is now off all painkillers. Instead she takes instead three drops of CBD oil three times a day.

“A friend who is suffering with cancer told me about it, saying it was good for pain. I had never taken an illegal substance in my life but I was at the stage where I would have eaten cement if I thought it would help.

For years, she had been getting about six three-day-long headaches a month, but since the summer she was getting them every day. Her life has been blighted by pain. Among the painkillers she has tried are Vicodin, DF118, Solpadeine, Morphine, Naproxen, Tramadol, Oxycontin, Zolmitriptan and Ibruprofen.

“When my friend told me about CBD oil I sent off to the same place she gets it, in the Netherlands. It’s very reasonably priced – €27.95 for a 10ml bottle.”

Frawley says she had no problem with customs and excise and the package – which usually contains five bottles and costs some €18 in postage – arrives at her house in Balbriggan, Co Dublin about 12 days after she orders.

“When I first got it I decided to go off all painkillers to give it a fair chance. The first time I took it I could actually feel the headache lessening immediately. I thought, ‘This is probably just a fluke’. But it works and I didn’t go back on the painkillers,” she says.

“It doesn’t get rid of the headache altogether and it takes an hour to work, but like with morphine, I can feel the pain lifting as soon as I take it, so I have a pain that is more like a ‘normal’ headache.”

One cannabis-based medicine, Sativex, containing both CBD and THC, is licensed for use in the State, but only in very limited circumstances and only for multiple sclerosis.

“If I had a medicine with the THC as well I’d be on the pig’s back,” she says. “ I am horrified to know that there is a safe product out there that could turn my life around completely and my Government will not allow me to have it. If they suffered with this pain, or they had a child suffering with extreme pain or epileptic seizures they wouldn’t be slow about making it available.”

She has talked to her neurological consultant about medicinal cannabis to help manage her pain. “I wanted some advice but she absolutely refused to even discuss it with me. She wouldn’t even allow the word cannabis to be used,” she says.

Frawley says she has become so passionate about the benefits of cannabis for medical purposes, that she is using “all my pain-free hours spreading the knowledge to everyone out there who does not know about it, just like I didn’t”.