Home being built from shipping container to house family for Christmas

Organisers hope endeavour will be used as a prototype by communities 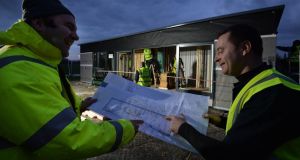 More than 60 contractors and suppliers are donating their materials and time free, to build what will be Ireland’s first home in a shipping container.

The 40ft long by 8ft wide container is undergoing extensive refurbishment and will be donated to the St Vincent de Paul charity in the hope of housing a family in time for Christmas.

The work is being carried out over three days in the grounds of the Irish Museum of Modern Art in Dublin and will be completed before its unveiling on Sunday. Many of those involved are from business networking group BNI Ireland.

State of the art

The vision for the project is to provide a “prototype” for communities who engage in other such endeavours to ease the housing crisis.

“We’re developing a prototype which people can build from, so we’re actively looking toward community groups, individuals who want to do it themselves, to prototype a system they can follow in a DIY way,” said Mr Trenaman.

“We’re trying to engage people and empower them. What we’re hoping for is that a community centre might come together with plumbers, welders and plasterers. With a small budget, they can pool together to build one of these.”

“You can definitely be much more value-engineered and more cost-effective than what we’ve done.

“The container will have a nine-metre window. If you were working on a more value-engineered model, you would have smaller windows.

“The insulation could also be reduced. We have other technology, such as micro heat recovery units, back boilers, solar panels, and hot water heating. It can sleep six, but it would be more suitable for a mother and two children.”

The initiative was set up by Carol Tallon of Buyers Broker International and Mr Trenaman of Ceardean Architects.